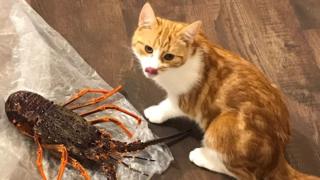 A cat belonging to New Zealand's new Prime Minister, Jacinda Ardern, has died after being hit by a car.

A spokesperson for Ms Ardern confirmed to local media that the so-called "First Cat" Paddles had died in an accident on Tuesday.

The cat was well-known for its polydactyl abnormality – she had extra claws that looked like thumbs.

A rescue cat, she had a following of thousands on Twitter, where her profile read: "Have thumbs, will tweet."

Social media has been filled with fans of the ginger and white cat expressing their upset that she had unexpectedly passed away.

Hi, I'm Paddles and I am the First Cat of New Zealand. I have opposable thumbs, I'm purrty special. pic.twitter.com/MPkxdhWCRu

Ms Ardern paid tribute to her "much-loved" pet, who was adopted from the New Zealand Society for the Prevention of Cruelty to Animals (SPCA).

She belonged to Ms Ardern and her partner Clarke Gayford, who has become known as New Zealand's 'first gent' since his wife became the country's youngest prime minister in over 150 years last month.

Mr Gayford – who presents a TV show about fishing – wrote about Paddles and his "surreal new life" on New Zealand's The Spinoff website only on Sunday.

He said before his wife's election he did not even own "a proper suit".

To anyone who has ever lost a pet, you'll know how sad we feel. Paddles was much loved, and not just by us. Thanks for…

Mr Gayford also shared that the couple ordered a takeaway curry on their first night in the prime minister's residence, but it never arrived because the delivery service "assumed it was a prank call".

In the article he also recalled how Paddles almost derailed his wife's phone call with US President Donald Trump.

He said she "came flying through the cat-flap" and "began announcing her very squawky arrival" before being hastily ushered out as to not disturb the call.

In a tweet the account's operator said he had spoken to Mr Gayford, who encouraged anyone who wanted to remember the cat to donate to the SPCA.