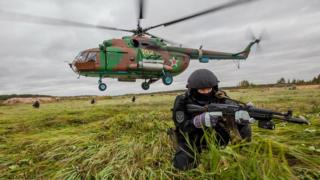 Russian President Vladimir Putin has called for elite soldiers in a new force – the National Guard – to protect the country's regional governors.

The proposal comes in a bill that MPs are expected to approve. The parliament is dominated by MPs loyal to Mr Putin.

Mr Putin has appointed 11 new governors ahead of a March presidential election. He is expected to seek a fourth term.

The new men are overwhelmingly younger than the governors they replaced.

Russian governors are appointed by the Kremlin and generally come from the Moscow power structure. Some have little previous connection with the region they are directed to manage.

More on this topic:

The force's chain of command leads directly to the Kremlin, bypassing the defence and interior ministries.

Mr Putin's bill also calls for the National Guard to protect unspecified "other figures", besides the governors.

Mr Putin has previously warned that Russia must protect itself from "colour revolutions" like those that toppled presidents in neighbouring Ukraine, Georgia and Kyrgyzstan.

A move to increase control over regional governors

Protection by the National Guard ('Rosguard') is not mandatory, but regional governors are entitled to ask for it.

Some governors are in fact already using this service, since Rosguard currently operates a number of private security firms, according to their chief adviser, Alexander Khinshtein.

Gennady Gudkov, an ex-KGB officer and former Duma deputy, told me that on the one hand this bill will seek to transfer responsibility (and the finances) for security from the interior ministry to regional offices of Rosguard. On the other hand, it will increase control over regional governors, he said.

Dmitry Fonarev, another ex-KGB officer, said the Kremlin could also call on other security bodies to rein in any defiant official. There is the Federal Security Service (FSB), successor to the KGB and formerly run by Mr Putin. There is the interior ministry, the prosecutor's office and – closest to Mr Putin now – the Federal Protective Service (FSO).

"The National Guard might be a decent axe, but it's no good as a scalpel," Mr Fonarev said.

The National Guard – known as "Rosgvardiya" in Russian – has more than 340,000 personnel, about 160,000 of whom come from the interior ministry forces, Tass news agency reports.

The force has some of Russia's most sophisticated military hardware and crack troops from special forces units. Some are specialist divers and parachutists.

Deploying the highly-trained troops across Russia's 89 regions and republics could enable the Kremlin to quickly quell any election-related unrest.

One of Mr Putin's fiercest critics, Alexei Navalny, has been barred from running as a presidential candidate.

A political analyst quoted by the Kommersant daily, Dmitry Oreshkin, described the National Guard as "an elite structure created by Putin – he trusts Zolotov most of all".

"The governors are being brought under tighter [Kremlin] control," he said.