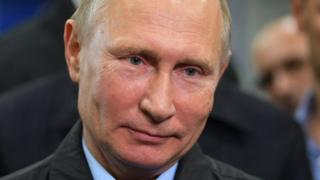 Russian President Vladimir Putin has accused the US of inventing doping allegations against Russian athletes in an attempt to influence next year's presidential election.

He was referring to life bans imposed by Olympic officials on four Russian cross-country skiers on Thursday.

Mr Putin said the move was a US response to "imaginary interference in their election".

US officials are probing alleged Russian involvement in the 2016 poll.

US intelligence agencies said earlier this year the Russian government had sought to help Donald Trump win the election.

An investigation by special counsel Robert Mueller is looking into any links between Russia and the Trump campaign.

Mr Putin has not yet said whether he will stand for re-election. However, he is widely expected to stand and win.

The Russian president suggested the timing of the Russian election, in March 2018, meant that a doping scandal coinciding with the run-up to next February's Winter Olympics in South Korea could be used to sow disaffection among sportspeople.

The US was home to "the main companies that order and pay for television rights, the main sponsors and advertisers", he said.

"In response to our imaginary interference in their election, [the US] wants to create problems in the Russian presidential election," he added.

Mr Putin was speaking shortly after four Russian skiers were found guilty of doping by the International Olympic Committee (IOC) and banned for life from the Olympics.

The four were named in the McLaren report last December, which alleges that a state-sponsored doping programme existed in Russia between 2011 and 2015.

IcetruckNovember 9, 2017
Like story:
tweet
Only if it serves the state: North Korea’s online experience
13 Riddles That Can Be Answered in No Time