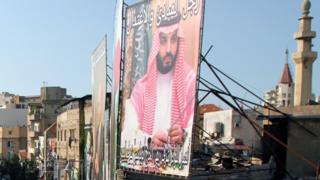 Saudi Arabia tells citizens to leave Lebanon at once

Saudi Arabia has told its citizens in Lebanon to leave the country immediately.

It has also urged Saudis not to travel there.

Tensions between the two countries have risen since Lebanon's Saudi-backed PM Saad Hariri resigned on Saturday, saying he feared for his life.

Saudi Arabia has also accused the Iranian-backed Lebanese militant group Hezbollah of firing a missile at it from Yemen shortly afterwards.

Many Lebanese fear that their country is becoming embroiled in a wider conflict between Saudi Arabia, a major Sunni power, and Shia-led Iran, its biggest regional rival.

In Lebanon, various political factions have called for the return of Mr Hariri, whom many believe was pressured into quitting by the Saudis.

He has made no further statement so far, but his office says he has been having meetings with foreign diplomats in Riyadh.

Meanwhile French President Emmanuel Macron, who is currently on a Middle East trip, has arrived in Saudi Arabia on a visit unexpectedly announced hours before.

He said he would discuss Lebanon and Yemen with Saudi Crown Prince Mohammed bin Salman, adding that he had been in informal contact with Mr Hariri.

Saudi official media quoted a foreign ministry source as saying: "Due to the situation in the Republic of Lebanon, the kingdom asks its nationals visiting or living in Lebanon to leave as soon as possible, and advises its citizens not to travel there."

Mr Hariri said in a TV broadcast from Saudi Arabia on Saturday that he was stepping down because of an alleged assassination plot.

Mr Hariri's father and former prime minister Rafik was killed by a bomb in 2005 in an attack widely blamed on Hezbollah.

On Monday Saudi Arabia accused Hezbollah of launching a missile from Yemen which was intercepted near the Saudi capital Riyadh, CNN reported.

IcetruckNovember 9, 2017
Like story:
tweet
Louis CK accused of sexual misconduct by 5 women
Vietnam seeks reassurances from Trump after his praise for China