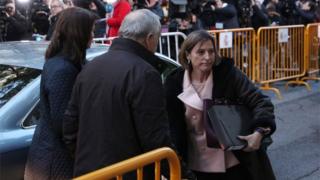 The former speaker of the Catalan parliament is appearing at Spain's Supreme Court over her role in the region's push for independence.

Judges may decide to remand Carme Forcadell and five former lawmakers in custody on charges of sedition, rebellion and misuse of public funds.

After the Catalan parliament voted to declare independence on 27 October, the Spanish government took direct control of the region and sacked its leaders.

Ms Forcadell has always maintained that holding discussions and votes in a democratically-elected parliament is not a crime.

A decision to jail them pending further investigation would probably spark further protests by supporters of Catalan independence.

They have already staged blockades of roads and rail stations, angered at the detention of the eight other politicians and two activists they see as political prisoners.

IcetruckNovember 9, 2017
Like story:
tweet
Kevin Spacey being replaced by Christopher Plummer in upcoming film
US and them: America, the elephant in room at climate talks