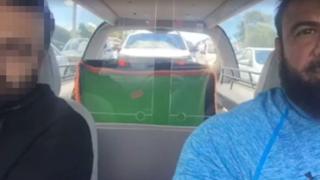 A man whose son died when a car crashed into a classroom in Sydney has said he forgives the driver of the vehicle.

The child was one of two eight-year-old boys who were killed in the tragedy at a primary school on Tuesday.

A 52-year-old woman, Maha al-Shennag, has been charged over the crash, which police believe was not intentional.

The father's message of forgiveness in Arabic was translated by an undertaker as the pair sat in a hearse on their way to the boy's funeral.

The video message, posted by Ahmad Hraichie, shows the boy's coffin in the background as he explains the father's view of the crash as an accident.

"They [the family] have forgiven. If anything, they want to sit with this lady and talk with her and tell her 'we forgive you'," says Mr Hraichie in his translation.

"She is welcome to come and sit with the family to have a meal and to talk about how they can move forward."

The father also calls for the community to stop any abuse aimed at the driver and the school.

"The father says they are making it bigger than it is. They are telling everyone out there. Forget her. It was an honest mistake. It could have happened to any of us," Mr Hraichie says.

Of the message, Mr Hraichie says: "This is the way a proper Muslim acts in a time of calamity and tribulation."

The crash at Banksia Road Public School in the suburb of Greenacre has rocked what local lawmaker Jihad Dib described as a "very close-knit community".

Three girls were taken to hospital with injuries after the crash.

Ms al-Shennag – also a parent at the school, according to Mr Dib – has been charged with dangerous driving occasioning death.