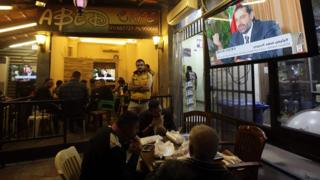 Mr Hariri spoke to Future TV from Riyadh, his first public remarks since he announced he was stepping down last week.

His cabinet allies say he is being held captive, but Mr Hariri denied this.

He has blamed the Iran-backed Hezbollah movement for his resignation, citing concerns over his and his family's safety.

The US and UK have warned other countries not to use Lebanon for proxy conflicts.

Mr Hariri, a Sunni leader and businessman, was nominated to form Lebanon's government in November 2016.

"I have resigned. I am going to Lebanon very soon and I will resign in the constitutional manner," he said in the TV interview.

A sombre Mr Hariri recognised that he did not resign in the "usual way" but said he wanted to give his country a "positive shock".

"My resignation came as a wake-up call for Lebanon," he said.

In televised remarks from Riyadh a week ago, Mr Hariri accused Iran and Hezbollah, a Shia group, of taking over Lebanon and destabilising the wider region.

He took aim at Hezbollah in his televised interview, saying: "I am not against Hezbollah as a party, I have a problem with Hezbollah destroying the country."

Mr Hariri also said that if he was to rescind his resignation, the Hezbollah movement must respect Lebanon's policy of staying out of regional conflicts.

But Mr Hariri insisted that he was free to travel as he pleased in the country. "I am free here. If I want to travel tomorrow, I will," he said.

His father, the former Lebanese leader Rafik Hariri, was killed in a car bombing in 2005.

Mr Hariri said that the main problem for the region was "Iran interfering in Arab states".

"I will not be responsible for taking Lebanon to a confrontation with the Arab states," Mr Hariri said, citing the recent launch of a missile against Riyadh from Yemen.

The Saudi-led coalition has accused Iran and Lebanon's Hezbollah operatives, working alongside Houthi rebels, of being behind the strike.

In a statement, UK Foreign Secretary Boris Johnson said he hoped Mr Hariri would return to Lebanon "without further delay".

Mr Johnson said the country "should not be used as tool for proxy conflicts" and its independence should be respected.

IcetruckNovember 12, 2017
Like story:
tweet
5 Ways To Deal With Passive Aggressive Behavior Without Losing Your Mind
Researchers Attempt to Find Out Exactly What Women Want In Bed