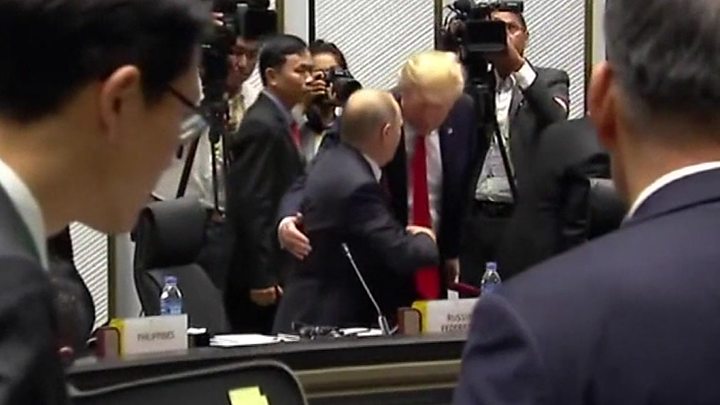 President Vladimir Putin feels insulted by allegations of Russian interference in the 2016 US election, Donald Trump has said after meeting him briefly at an Asia-Pacific summit in Vietnam.

"He said he absolutely did not meddle in our election," the US leader said.

The US intelligence community concluded earlier that Russia had indeed tried to sway the poll in favour of Mr Trump.

Mr Trump later tweeted that he had "good discussions" with his Russian counterpart when they crossed paths at the summit. He also called out "hater and fools" who do not realise that "having a good relationship with Russia is a good thing".

When will all the haters and fools out there realize that having a good relationship with Russia is a good thing, not a bad thing. There always playing politics – bad for our country. I want to solve North Korea, Syria, Ukraine, terrorism, and Russia can greatly help!

The US justice department has appointed special investigator Robert Mueller to examine any possible collusion involving Mr Trump's team, and legal action has already been taken against several former aides.

President Trump has refused to acknowledge a reported assessment by the CIA and other intelligence agencies that Russia was behind the hacking of the Democratic National Committee (DNC) in the run-up to last year's presidential election.

In addition to the Mueller inquiry, congressional committees have been set up to carry out their own investigations.

What does Mr Trump say to the allegations?

He said he believed Mr Putin had been "very insulted by" the allegations and that was "not a good thing" for America.

Asked if he believed Mr Putin, he replied, "He is very, very strong in the fact that he didn't do it. You have President Putin very strongly, vehemently says he has nothing to do with that. Now, you are not going to get into an argument, you are going to start talking about Syria and the Ukraine."

How did the two presidents get on in Vietnam?

Mr Trump and Mr Putin met for the first time in July at a G20 summit in the German city of Hamburg. In Da Nang they were seen chatting briefly on three occasions within 24 hours during the Asia-Pacific Economic Co-operation (Apec) summit.

However, they had no formal bilateral meeting, with Mr Putin blaming it on scheduling and protocol.

They had warm words for each other, with the US president talking of their mutual "very good feeling" and the Russian leader describing his counterpart as "well-mannered… and comfortable to deal with".

They did manage to sign off a statement vowing to continue the battle against so-called Islamic State in Syria until the militants are defeated and calling for a political solution to the conflict.