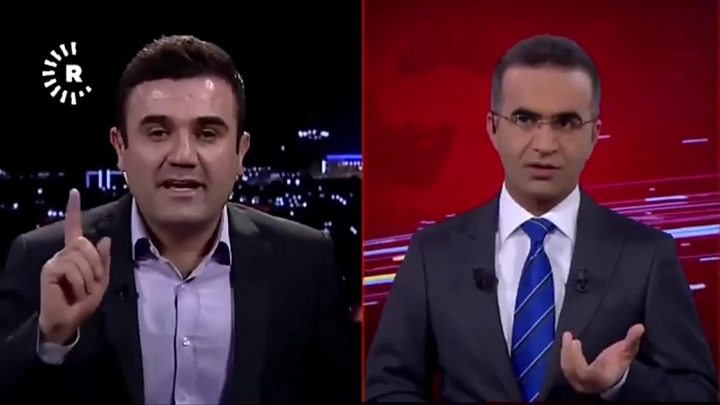 A 7.3-magnitude earthquake has shaken the northern border region between Iran and Iraq, killing at least 335 people and injuring thousands more.

One Iranian aid agency said 70,000 people needed shelter after the quake, one of the largest this year.

The majority of those who died were in Iran's western Kermanshah province. Nearly 4,000 were said to be injured.

Seven people died in Iraq, where people fled into the streets in the capital, Baghdad.

Mosques in the city have been broadcasting prayers through loudspeakers.

"I was sitting with my kids having dinner and suddenly the building was just dancing in the air," a Baghdad mother-of-three, Majida Ameer, told Reuters news agency.

"I thought at first that it was a huge bomb. But then I heard everyone around me screaming: 'Earthquake!'"

Most of the victims were in the town of Sarpol-e Zahab, about 15km (10 miles) from the border, Iran's emergency services chief, Pir Hossein Koolivand was quoted as saying on Iranian state television channel Irinn.

Many homes in the mountainous area are made of mud bricks and are at risk of collapse in a significant earthquake like the one that struck on Sunday.

Damage was reported in at least eight villages, the head of Iran's Red Crescent Organisation, Morteza Salim, told the channel.

"Some other villages have suffered power cuts and their telecommunications system has also been disturbed," he said.

Rescue teams were being hampered by landslides, Mr Koolivand said.

On the Iraqi side, the most extensive damage was in the town of Darbandikhan, 75km (47 miles) east of the city of Sulaimaniyah in the Kurdistan Region.

The Iraqi ministry of health said 321 people had been wounded in the Iraqi Kurdistan region.

The BBC's Rami Ruhayem, in the regional capital Irbil, said shaking there lasted for more than a minute.

"For a few seconds at first it was barely detectable, I wasn't sure whether it was a minor tremor or just my imagination," he said. "But soon enough it was unmistakable as the building started swaying from side to side."

The quake hit at 21:18 local time (18:18 GMT) about 19 miles (30km) southwest of Halabja, near the northeastern border with Iran, the US Geological Survey (USGS) said.

It occurred at a relatively shallow depth of 23.2 km (14.4 miles), and tremors were felt in Turkey, Israel and Kuwait.

Why is Iran prone to earthquakes?

Iran is one of those regions of the world that is all too familiar with quakes, and has experienced some very big tremors in the past.

In general terms, the big driver here is the clash between the Arabia and Eurasia tectonic plates. The former is pushing north by a couple centimetres a year.

In the south-east of the country, the Arabia plate is actually pushing under the Eurasia plate, but in the northwest these great slabs rub directly against each other. The Zagros mountains are a result of all this compression.

Early reports indicate the quake occurred on a thrust fault. This means the crust on one side of the break in the rocks is moved vertically up and over the other side – which fits exactly with this general picture.

Geological agencies now produce immediate bulletins on the likely expected casualties. This modelling work is based on factors such as the size of the quake, population density and what is known about local construction methods. It's inexact work, but the first bulletins suggested this event could produce many hundreds of deaths and perhaps thousands of injured individuals.

A major issue will be the number of weak buildings – it's a region that still has many mud-constructed properties. And as ever, in the more mountainous areas, landslides are always a concern, not least because they can block roads and hamper the emergency response.

Are you in the area? Have you been affected by the earthquake? If it's safe to share your experiences then please email [email protected] with your stories.