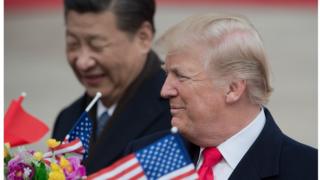 US President Donald Trump wraps up a 12-day tour of Asia on Tuesday which he said created $300bn (£228bn) in sales to companies in the region and several major energy deals.

Energy agreements made up roughly half the total value of deals in China.

If it proceeds, a project in Alaska would mark the first major investment by a Chinese energy firm in the US.

But analysts have doubts over whether this, and other, multi-billion dollar projects will be realised.

Mr Trump adopted a defiant tone on commerce during his five-nation tour through Asia and said the US would no longer tolerate "chronic trade abuses".

He stressed the need to narrow "unfair" trade deficits while touting billions of dollars in commercial deals, mostly with China.

"We've made some very big steps with respect to trade, far bigger than anything you know, in addition to about $300bn in sales to various companies, including China – that was $250bn and going up very substantially from that," he said in Manila on Monday.

But it is unclear how much of the total figure includes past agreements or potential future deals. Many of the deals are non-binding, and some had been previously announced.

Among the energy agreements, the highest value was China Energy Investment Corporation's plan to invest $83.7bn over two decades in shale gas and chemical manufacturing projects in the state of West Virginia.

That was followed by a $43bn deal to develop liquefied natural gas in Alaska, between China's top state oil firm Sinopec, Bank of China and China Investment Corp, and Alaska Gasoline Development Corp.

The US and Japan also confirmed their "Strategic Energy Partnership" which the White House said was designed to "promote universal access to affordable and reliable energy in Southeast Asia, South Asia, and Sub-Saharan Africa".

The agreements with Chinese companies were seen as the most notable.

John Driscoll, director at JTD Energy Services in Singapore, said the Chinese have been pushing to expand their energy portfolio for more than a decade.

Those aspirations have seen the world's second largest economy explore for energy around the world – including projects in Africa, Latin America and Canada – but not in the US.

Dr Jeffrey Wilson, associate director, Asia Research Centre at Murdoch University told the BBC: "If this [Sinopec deal] goes through it would be the first time we've seen a Chinese major make a serious play into the US."

In 2005, Chinese oil major CNOOC made a bid for US energy company Unocal, sparking a political backlash in the US that ultimately led to the bid being withdrawn. Dr Wilson said that since then, none of the three large Chinese state-owned energy firms – CNPC, Sinopec and CNOOC – have attempted a push into the US market.

While the big three Chinese energy firms have typically focused on standard oil and gas, they have not – until now – been big players in "unconventional" hydrocarbons, which includes shale oil and fracking.

The $83.7bn shale deal in West Virginia – the state where Trump promised to revive the coal industry – could change that.

Fracking took off in the US in 2010 as a means to extract large reserves of oil from within hard rock. The industry had support from the government as a means of achieving energy independence and bringing down prices at the pump.

China is sitting on its own massive shale deposits but Dr Wilson said its companies "lack the ability to exploit them in a cost-competitive manner".

"A move into US shale – the most advanced and technologically sophisticated shale sector in the world – would be a useful 'learning exercise' for Sinopec, by which it could experiment with new techniques that in later years could be applied at home," he said.

But doubts hang over both deals.

The development in Alaska, which the White House said could create 12,000 jobs in the construction phase, has had a difficult history and struggled to find local partners.

"There has been a lot of concern about the feasibility of the Alaska pipeline and a number of gas companies have passed on it," said Matthew Busch, East Asia research fellow at the Lowy Institute in Sydney.

And Mr Busch, along with other analysts, stressed that while the headline numbers are big, the agreements are far from final. Neither the West Virginia shale or Alaska LNG deal involves any financial agreements or contracts.

"There's no financial commitments, no contracts to take gas behind either of these," Mr Busch said, adding they have simply "agreed to talk further".

Murdoch University's Dr Wilson said the agreements might create good "optics for the US president to look like he is 'doing deals', rather than a genuine set of deals itself with meaningful White House involvement".