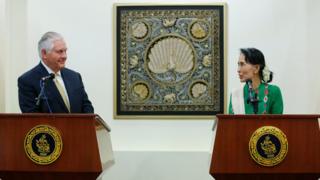 US Secretary of State Rex Tillerson has called for an independent investigation into Myanmar's Rohingya crisis.

Myanmar's army has been accused of killing Rohingya people and burning their villages, forcing hundreds of thousands to flee to Bangladesh.

Mr Tillerson said the crisis concerned the US, but added that sanctions against Myanmar were "not advisable" at this time.

International pressure has been mounting for months on Aung Sang Suu Kyi to condemn the army's alleged brutality and what the UN human rights chief has described as a "textbook example of ethnic cleansing".

Ms Suu Kyi is the de-facto head of Myanmar's civilian administration but does not have control over the military. Her government has denied entry to UN investigators looking into allegations of ethnic cleansing.

She is accused of ignoring the plight of the Rohingya, a Muslim minority which is left stateless in majority-Buddhist Myanmar.

But speaking alongside Mr Tillerson at a joint press briefing on Wednesday in Myanmar's capital Naypyitaw, she said she had "not been silent".

Some US lawmakers have introduced legislation that would impose targeted sanctions and travel restrictions on military officials in Myanmar over the crisis. The proposed measures would not target Ms Suu Kyi, who enjoyed widespread support in Washington during her years of house arrest under military rule.

While Mr Tillerson said he did not support broad economic sanctions, he said the US was "distressed" by the suffering of Rohingya refugees fleeing to Bangladesh.

"Scenes of what occurred are just horrific," he told reporters, adding that it was the biggest crisis Myanmar had faced since the transition from military rule.

About 600,000 Rohingya have fled Myanmar since August this year, after Rohingya militant attacks on police posts sparked counter-insurgency operations.

Mr Tillerson condemned the attacks by the Arakan Rohingya Salvation Army (Arsa), calling them "unprovoked" and something that US had "zero tolerance" for.

The US would continue to support Myanmar's transition to democracy, he said, adding: "We want to see Myanmar succeed… I have a hard time seeing how [sanctions] helps resolve this crisis."

But he said he would review the sanctions legislation back in Washington.

He also said the US would provide more aid to help both Bangladesh and Myanmar address the humanitarian crisis. The UN has warned that refugees are now at risk of sexual exploitation in Bangladesh.

On Tuesday, the Myanmar army released the results of an internal investigation in which it exonerated itself of blame regarding the Rohingya crisis.

However, the investigation's results contradicted evidence seen by BBC correspondents on the ground.

Amnesty International said the army's report was an attempted "whitewash" and called for UN factfinders to be allowed into the region.