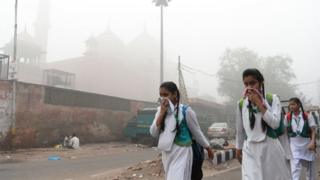 Air quality is now said to have improved from "severe" to "very poor".

A court-mandated panel lifted a ban on construction and trucks entering the city and reduced parking fees that had been temporarily hiked.

However some other measures remain in place, including the closure of a major power plant and a ban on brick kilns and stone crushers, the PTI news agency reported.

According to a 2015 study by the Centre for Science and Environment, the Badarpur power plant in south Delhi is the most polluting in India.

The chairman of the Environmental Pollution Control Authority (ECPA), Bhure Lal, has written to the governments of Delhi and the neighbouring states of Haryana, Punjab and Uttar Pradesh, about the panel's decision.

He said, however, that the ECPA was watching the situation "very carefully", noting that the India Meteorological Department had warned that pollution could rise in the city again in the coming days.

Many complained of stinging eyes, chest pain and breathlessness.

Delhi's air, among the world's dirtiest, worsens in the winter months.

This happens because farmers in neighbouring Punjab and Haryana states burn crop stubble to clear their fields.

Low wind speeds, dust from construction sites, rubbish burning in the capital and firecrackers used in festivals all contribute to increased pollution levels.