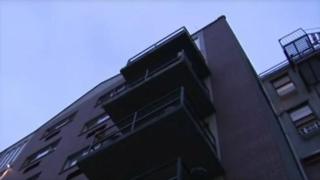 An Australian diplomat has died after falling from a New York City balcony while socialising with friends.

Julian Simpson, 30, accidentally slipped from a seventh-floor ledge of his Manhattan building and fell to a landing on the second floor, New York police said.

US media report he was playing a "trust game" with a friend before he fell.

Mr Simpson was a junior diplomat representing Australia at the United Nations.

Police were called to the scene about 01:00 local time on Wednesday (06:00 GMT). Mr Simpson was taken to hospital where he was pronounced dead.

The Australian envoy had been out with his wife and friends when they returned home to view the Empire State Building, which was lit up to celebrate Australia's same-sex marriage vote result, police said.

An NYPD spokesperson would not confirm reports that he was playing a "trust" game that involved putting himself at risk and relying on one of his guests to catch him.

"He's described as somebody who liked to play games and had sat on the balcony railing and accidentally lost his balance," Martin Brown said.

"Our hearts go out to his family but I cannot provide any more details at this stage," he told the local Seven Network.

Foreign Minister Julie Bishop said she was saddened by the death of Mr Simpson, who she had met recently in New York.

"Julian was a diligent, professional and highly skilled diplomat, whose support I valued, during UN Leaders' Week," she said.

Mr Simpson had been in the US for two years.