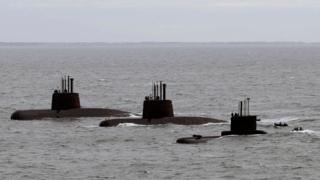 The Argentine navy is searching the South Atlantic for a submarine that has not made contact for 48 hours.

The vessel with its 44 crew was last located more than 400km (250 miles) off the coast of Patagonia, the navy said.

There is no sign yet that the problem is anything worse than a communications failure, a spokesman said.

Navy spokesman Enrique Balbi told the newspaper the submarine had been on its way from the Ushuaia naval base to the Mar del Plata base, its usual station, when "at some moment communication stopped".

Mr Balbi said the submarine had food supplies for several days and was probably continuing its planned journey.