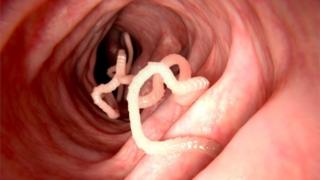 A North Korean soldier who was shot while fleeing across the border has an extremely high level of parasites in his intestines, his doctors say.

The defector crossed the demilitarised zone on Monday, but was shot several times by North Korean border guards.

Doctors say the patient is stable – but "an enormous number" of worms in his body are contaminating his wounds and making his situation worse.

His condition is thought to give a rare insight into life in North Korea.

"I've never seen anything like this in my 20 years as a physician," South Korean doctor Lee Cook-jong told journalists, explaining that the longest worm removed from the patient's intestines was 27cm (11in) long.

What does it tell us about N Korea's standards of health?

"North Korea is a very poor country and like any other poor country it has serious health problems," Prof Andrei Lankov of Kookmin University in Seoul told the BBC.

"North Korea does not have the resources to have a modern medical system," he says. "Its doctors are relatively poorly trained and have to work with primitive equipment."

In 2015 South Korean researchers studied the health records of North Korean defectors who had visited a hospital in Cheonan between 2006 and 2014.

"I don't know what is happening in North Korea, but I found many parasites when examining other defectors," Professor Seong Min of Dankook University Medical School was quoted by the Korea Biomedical Review as saying.

But Prof Lankov points out that compared with other countries with a similar per capita income – like Bangladesh or many African countries – the population in North Korea is healthier than one would expect. The country's life expectancy is well above average considering the level of economic poverty, he says.

Are the parasites endangering the soldier?

Yes. Considering that he is already in a critical condition, they are making a bad situation much worse.

The soldier was shot at least six times when North Korean border guards opened fire on him as he ran across the Joint Security Area in Panmunjom to the South Korean side.

The young soldier was rushed by helicopter to a hospital in South Korea and has undergone emergency surgery.

Doctors say there is a severe contamination of the wounds by both parasites and faeces.

"We are paying close attention to prevent possible complications," surgeon Lee Cook-jong told reporters, explaining that "an enormous number of parasites" including roundworms had been found in the small intestine.

How do you get a parasite?

Humans can get parasites through eating contaminated food, by being bitten by an insect or by the parasite entering through the skin.

In the case of the North Korean defector, the first case is most likely. Parasites which enter the body via contaminated food are often worms.

The soldier's food may have been contaminated because the North still uses human faeces as fertiliser, known as "night soil".

Lee Min-bok, a North Korean agriculture expert, told Reuters: "Chemical fertiliser was supplied by the state until the 1970s. By the 1990s, the state could not supply it any more, so farmers started to use a lot of night soil instead."

If these faeces are untreated and fertilise vegetables that are later eaten uncooked, the parasites get into the mouth and the intestines of the person.

While some don't cause any severe symptoms, others can be life-threatening, explains Prof Peter Preiser from the School of Biological Sciences at Nanyang Technological University in Singapore.

"What they all do is take nutrients away from your body," he told the BBC. "So [even] if most of them might go unnoticed, they all indicate a poor health status. To put it simply: people who have parasites are not healthy."

If the intestines are disrupted and parasites are released into the body cavity, they can be a lot more dangerous and much more complicated to treat.

Also, he is likely to have had the parasites for a long time. This means "that patient will generally be in a weaker state so any wounds and surgery will become more dangerous," explains Prof Preiser.

Is this a problem particular to North Korea?

Parasites, especially worms, are thought to be widespread in North Korea. However, they also affect many developing countries where diets include uncooked vegetables fertilised with faeces.

There are ways to treat faeces so they can be used as a safe fertiliser, but many poor countries neglect to do so. Prof Lankov says this seems to be the case in North Korea.

The poor health and nutrition has widespread consequences "but North Korea does not admit this because they fear this will affect their image too much".

Should there ever be a reunification of the two Koreas though, there would be massive health problems for officials to deal with for decades to come, Prof Lankov warns.