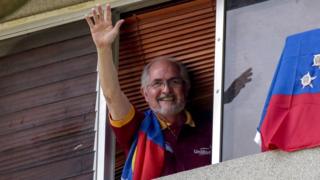 The mayor of Caracas has escaped from his long-term house arrest in Venezuela and fled across the border to Colombia.

Antonio Ledezma has been confined since early 2015 on charges of supporting an attempted coup, which he denies.

The 62-year-old is a vocal opponent of President Nicolás Maduro, whom the US has labelled a dictator.

Colombian authorities confirmed that Mr Ledezma entered the country on Friday. It is unclear how he escaped and made it to the border undetected.

Mayor Ledezma had recently passed the marker of 1,000 days in detention.

Along with opposition leader Leopoldo López, who remains under house arrest, Mr Ledezma is one of the best-known opponents of President Maduro.

They are accused of inciting violence during anti-government protests in 2014.

Both were re-arrested in August in the wake of further protests. At the time, the country's Supreme Court said it had received intelligence reports saying they planned to flee the country.

That prompted US President Donald Trump to warn the "Maduro dictatorship" over the treatment of "political prisoners."

He said the US held the Venezuelan president "personally responsible for the health and safety of Mr López, Mr Ledezma and any others seized".