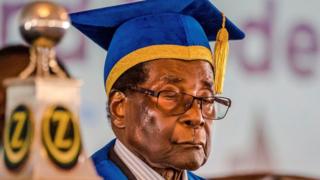 Zimbabwe's military has said it will back a protest march on Saturday in the capital Harare against President Robert Mugabe, as long as it is peaceful.

The move comes amid growing calls for Mr Mugabe, 93, to step down, following the military's takeover on Wednesday.

Most regional branches of the ruling Zanu-PF party have joined war veterans and liberal groups in calling for his resignation.

Earlier Mr Mugabe made his first public appearance since the takeover.

Mr Mugabe had been under house arrest for days, but attended a graduation ceremony on Friday, handing out degrees.

The army made its move after a power struggle over his successor. Mr Mugabe sacked Vice-President Emmerson Mnangagwa last week, apparently to pave the way for his wife Grace Mugabe – who is four decades younger than him – to take over the presidency instead.

Who is backing the protests?

In a statement issued on Friday evening, the Zimbabwe Defence Forces (ZDF) said it had been approached by organisers of a "solidarity march".

Earlier Christopher Mutsvangwa – the leader of the influential war veterans' association, once loyal to Mr Mugabe – called for a huge turnout at the rally.

"We want to restore our pride and tomorrow is the day… we can finish the job which the army started," he said.

Additionally Zanu-PF members meeting on Friday evening agreed to mobilise support for and attend the rally. The party is planning to hold a special central committee session over the weekend to discuss the crisis.

Eight of 10 regional party branches voted for Mr Mugabe to resign as president and party secretary.

Soldiers seized the headquarters of Zimbabwe's national broadcaster ZBC on Wednesday and loud explosions and gunfire were heard.

What has the reaction been across the world?

To get to President Mugabe's rural home you drive along the Robert Mugabe highway. It's probably one of the best maintained roads in Zimbabwe, like driving on a carpet. Along the way you are greeted by a plaque erected in his honour.

The man goes to St Francis Xavier Roman Catholic Church with Mr Mugabe, a devout Christian, whenever he visits. "He never demands special treatment. He visits people to check on their welfare," said the man at his compound.

He said he supports the move by the army saying it's meant to correct a broken system. "If his term goes out then there's nothing wrong," he said.