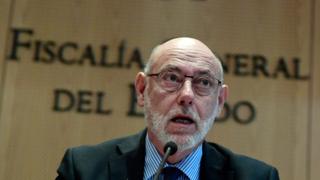 Spain's attorney general José Manuel Maza has died suddenly in Argentina, where he was attending a conference. He was 66.

Earlier on Saturday he had been reportedly taken to an intensive care unit with a kidney infection.

Last month, Mr Maza called for charges to be brought against Catalan leaders, following a banned independence referendum in the region.

In a tweet (in Spanish), Prime Minister Mariano Rajoy expressed his "deepest condolences" to Mr Maza's family and friends.

By the BBC's James Reynolds in Barcelona

He'd been heavily involved in the constitutional crisis here in Catalonia.

Mr Maza had decided that the Catalan separatists' attempt to break away from Spain was a criminal matter.

Right now, the main target of the prosecution, deposed Catalan leader Carles Puigdemont, remains in Belgium – from where he is contesting Spain's request to extradite him.

IcetruckNovember 18, 2017
Like story:
tweet
Palestinians ‘could freeze US ties’ over Washington office closure
US warship collides with Japanese tug in latest incident