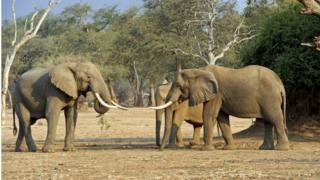 President Donald Trump has suspended the import of elephant hunting trophies, only a day after a ban was relaxed by his administration.

Imports of trophies from elephants legally hunted in Zambia and Zimbabwe had been set to resume, reversing a 2014 Obama-era ban.

But late on Friday, President Trump tweeted the change was on hold until he could "review all conservation facts".

The move to relax the ban had sparked immediate anger from animal activists.

"Your shameful actions confirm the rumours that you are unfit for office," said French actress and animal-rights activist Brigitte Bardot in a letter to President Trump.

Put big game trophy decision on hold until such time as I review all conservation facts. Under study for years. Will update soon with Secretary Zinke. Thank you!

Protests spread on social media with many sharing images of President Trump's sons posing with dead animals during their hunting trips in Africa.

One photo of Donald Trump Jr shows him holding the amputated tail of a dead elephant.

The US Fish and Wildlife Service (USFWS) had argued that hunting fees could aid conservation of the endangered animals.

Experts say that populations of African elephants are plummeting.

The non-profit group's report found a population drop of 6% in Zimbabwe alone.

Despite their listing under the Endangered Species Act, there is a provision in US law that allows permits to import animal parts if there is sufficient evidence that the fees generated will actually benefit species conservation.

In 2015 a US dentist from Minnesota killed a famous lion named Cecil in Zimbabwe's Hwange National Park.

Cecil's death triggered an outrage in the US and Zimbabwe, and briefly forced the hunter into hiding.