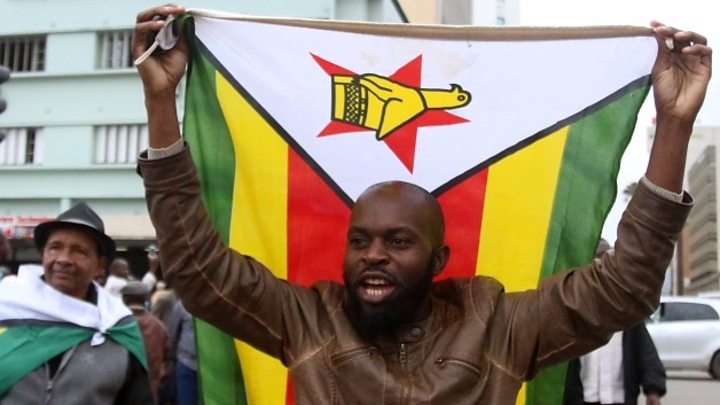 Jubilant scenes are unfolding on the streets of Zimbabwean cities, as protests demanding the resignation of President Robert Mugabe have turned into a celebration of the army's role in ending his grip on power.

BBC correspondents say protesters in the capital, Harare, are hugging and cheering soldiers in the crowd.

One demonstrator told the BBC the day was "about a new beginning".

The rally is supported by the army and members of the ruling Zanu-PF party.

War veterans – who until last year were loyal to the president – are also saying Mr Mugabe should quit. The mix of people at the rally is unprecedented, correspondents say.

Protesters have started to converge on State House but the army has moved them away. Some people staged a sit-down protest in front of a line of troops, and opposition leader Morgan Tsvangirai has addressed the crowd, to cheers.

One man arriving at the rally said: "As Zimbabweans, we are saying to our army – thank you very much for the peaceful intervention.

"And it's time for the masses of Zimbabwe to say: Mugabe must go and must go, like, yesterday. We can't wait to see his back. For us, it's about the end of authoritarian rule and we are going to take our Zimbabwe back."

The representative of Zanu-PF in London, Nick Mangwana, told BBC Radio 4's Today programme that the party would feed protesters at a rally outside Mr Mugabe's home, and would "not be leaving until they have a letter of resignation".

"This could be over in 20 minutes," he said. "People arrive, he resigns, people go away, it's over."

Mr Mugabe, 93, had been under house arrest since the army takeover on Wednesday, but on Friday he made his first public appearance. He spoke only to open the graduation at a university of which he is chancellor.

His wife, Grace, was not present. It had been thought she had left the country but it emerged on Thursday that she was at home with Mr Mugabe.

The military made its move after a power struggle over the successor for Mr Mugabe.

He sacked Vice-President Emmerson Mnangagwa last week, apparently to pave the way for Grace Mugabe, who is four decades younger than him, to take over the presidency.

Mr Mugabe has led Zimbabwe since it gained independence from Britain in 1980.

Analysis by the BBC's Andrew Harding in Harare

Euphoric crowds are surging through the centre of Harare, chanting "He must go!" and waving placards demanding President Mugabe's immediate resignation. People are sitting on their cars, horns blaring, and on top of buses, holding Zimbabwean flags.

"This is a revolution," said one man emerging from a supermarket to join the protesters. "It has been a long time coming."

For years such scenes have been unthinkable in Zimbabwe, but the army and governing Zanu-PF gave these rallies their blessing, and the fear that held back so many people appears to have lifted overnight.

"We just want change," said a woman in a long queue outside a bank in the centre of Harare. Others spoke of the country's deep economic problems and its soaring unemployment, and hoped that a change of leadership might improve people's lives.

The governing party – now ruthlessly purging itself – will be hoping to retain its iron grip on power in Zimbabwe, but today's extraordinary street protests may have unlocked forces that will be hard to control.

IcetruckNovember 18, 2017
Like story:
tweet
21 Points on Your Feet You Can Massage to Improve Your Well-Being
New US weather satellite launched from California