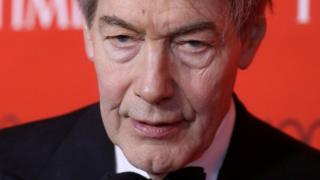 An email to staff said the presenter's employment had been "terminated… effective immediately".

It said the move followed the revelation of "extremely disturbing and intolerable behaviour" said to have taken place around his programme.

Eight women accused the veteran TV interviewer of inappropriate behaviour in a report by the Washington Post.

Following the allegations he was suspended by CBS, PBS and Bloomberg. Rose co-hosted the CBS This Morning show and was a correspondent for its Sunday night news magazine 60 Minutes. He appeared on PBS and Bloomberg with the Charlie Rose show.

Rose apologised following the Washington Post story, but said not all the claims were accurate.

The allegations span from the 1990s to 2011 and include groping, lewd telephone calls and unwanted advances.

The internal email to staff from CBS News president David Rhodes read: "Despite Charlie's important journalistic contribution to our news division, there is absolutely nothing more important, in this or any organisation, than ensuring a safe, professional workplace – a supportive environment where people feel they can do their best work. We need to be such a place.

"I've often heard that things used to be different. And no-one may be able to correct the past. But what may once have been accepted should not ever have been acceptable."

Rose, 75, is one of America's most respected broadcasters and his interviews have won him Emmy and Peabody awards. He was named by Time magazine as one of its 100 most influential people in 2014.

He is known for conducting in-depth interviews, including with such high-profile guests as former President Barack Obama, talk show host Oprah Winfrey and billionaire Warren Buffett, on his eponymous television programme which first aired in 1991.

In recent weeks, numerous high-profile figures, including Oscar-winning actors and a Hollywood filmmaker, have been accused of sexual harassment.