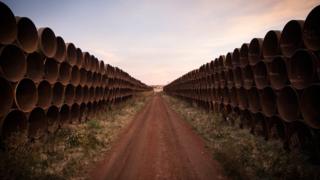 Nebraska regulators have approved the Keystone XL pipeline, clearing the way for the controversial and long-delayed project to progress.

Commissioners voted 3-2 in favour of the project, which will link Canada's oil sands to US refineries.

The decision comes days after a leak in the existing Keystone network spilled 210,000 gallons in South Dakota.

The pipeline is backed by US President Donald Trump but opposed by environmentalists and some landowners.

Former President Barack Obama had rejected the project in 2015 on environmental grounds, but President Trump reversed the decision earlier this year.

That left the regulatory fate of the 1,179-mile (1,897-km) pipeline in the hands of Nebraska's Public Service Commission.

On Monday, the commissioners voted to approve the "mainline alternative route", slightly different from the route preferred by TransCanada, the firm spearheading the project.

Unlike the preferred route, the alternative route heads farther east for part of its travel through the state, more closely matching the path of the existing pipeline.

TransCanada said in a statement that it would "conduct a careful review" of the ruling while assessing how the decision would impact the cost and schedule of the project.

Keystone XL pipeline: Why is it so disputed?

Alberta Premier Rachel Notley said the pipeline's approval is a positive step towards diversifying the market for Canada's oil.

The decision is subject to appeal. TransCanada is also reviewing demand from shipping firms.