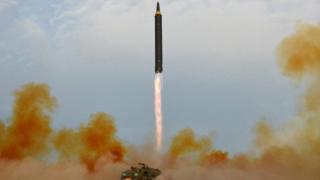 The US has unveiled fresh sanctions against North Korea which it says are designed to stop its funding of nuclear and ballistic missile programmes.

It comes a day after US President Donald Trump redesignated North Korea as a state sponsor of terrorism.

The North is already subject to a raft of sanctions from the US, the UN and the EU.

The US has been imposing sanctions on Pyongyang since 2008, freezing the assets of individuals and companies linked to its nuclear programme and banning the exports of goods and services to the country.

"As North Korea continues to threaten international peace and security, we are steadfast in our determination to maximise economic pressure to isolate it from outside sources of trade and revenue while exposing its evasive tactics," said Treasury Secretary Steven T Mnuchin on Tuesday.

"These designations include companies that have engaged in trade with North Korea cumulatively worth hundreds of millions of dollars. We are also sanctioning the shipping and transportation companies, and their vessels, that facilitate North Korea's trade and its deceptive manoeuvres."

Also targeted is the Korea South-South Co-operation Corporation which is alleged to have created revenue for the North by sending workers to countries including Russia, Poland, Cambodia and China.

In September, the US proposed a range of United Nations sanctions against North Korea, including an oil ban and a freeze on leader Kim Jong-un's assets.