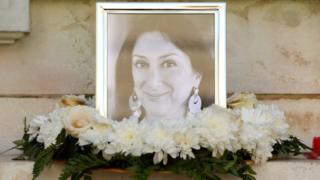 The family of an investigative journalist killed in a car bomb attack in Malta have filed a lawsuit against the police for allegedly failing to carry out an impartial investigation.

They say there is a potential conflict of interest because Silvio Valletta is married to a government minister.

Caruana Galizia was known for her blog accusing top politicians of corruption.

Officials say she was killed by a remotely detonated car bomb near her home in Bidnija, a village in northern Malta, on 16 October.

Her reporting had targeted Mr Valletta, the officer in charge of the investigation into her killing.

He is the current deputy police commissioner and is married to Justyne Caruana, who was appointed minister for the island of Gozo earlier this year.

"A government and a police force that failed our mother in life will also fail her in death. The people who for as long as we can remember sought to silence our mother cannot now be the ones to deliver justice," they said.

Caruana Galizia was a harsh critic of the government and effectively triggered an early election this year by publishing allegations linking Prime Minister Joseph Muscat to the Panama Papers scandal.

Mr Muscat and his wife denied claims they used secret offshore bank accounts to hide payments from Azerbaijan's ruling family – and he was returned to power in the election, despite the controversy.