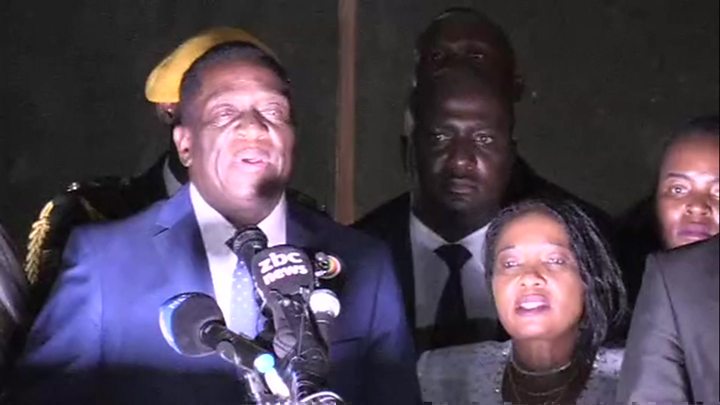 Zimbabwe's incoming leader Emmerson Mnangagwa has hailed a "new and unfolding democracy" after returning from exile to replace Robert Mugabe.

He also vowed to create jobs in a country where some estimates say 90% of people are unemployed.

"We want to grow our economy, we want peace, we want jobs, jobs, jobs," he told a cheering crowd in Harare.

Mr Mnangagwa, who fled to South Africa two weeks ago, is to be made the new president on Friday, state TV said.

He told supporters at the headquarters of the ruling Zanu-PF party that he had been the subject of several assassination plots and thanked the army for running the "process" of removing Mr Mugabe peacefully.

The news that 93-year-old Mr Mugabe was stepping down sparked wild celebrations across the country late into Tuesday night.

It came in the form of a letter read out in parliament on Tuesday, abruptly halting impeachment proceedings against him.

A spokesman for the ruling Zanu-PF party said Mr Mnangagwa, 71, would serve the remainder of Mr Mugabe's term until elections that are due to be held by September 2018.

Nicknamed the "crocodile" because of his political cunning, Mr Mnangagwa met South African President Jacob Zuma before leaving for Zimbabwe.

'Which snake's head was crushed?'

Thousands of party supporters waited for hours to welcome Mr Mnangagwa in his first public appearance since he emerged from hiding.

During his 20-minute speech, he corrected himself at least once for referring to Mr Mugabe as president rather than former president. His message was largely conciliatory.

But he also relished his stunning return to power and successful removal of Mr Mugabe. He brought up Grace Mugabe's speech a fortnight ago, in which – meaning him – she said we must "deal with the snake by crushing its head". A day later he was fired.

"I wonder which snake's head was crushed?" he said to loud cheers.

However, Mr Mphoko – a key ally of Mrs Mugabe – has just been fired by Zanu-PF and is not believed to be in the country. In his absence, the party has nominated Mr Mnangagwa, the speaker of parliament confirmed.

African Union president Alpha Condé said he was "truly delighted" by the news, but expressed regret at the way Mr Mugabe's rule had ended.

Are you Zimbabwean? What are your hopes for the future of the country? Email [email protected] with your comments.