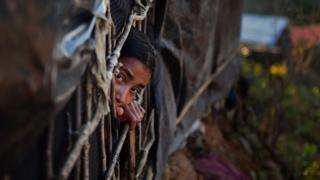 A statement from the Bangladesh foreign ministry said displaced people could begin to return within two months.

The two sides say they are working on the details of the deal, which was signed in Myanmar's capital Nay Pyi Taw

Aid agencies have raised concerns about the forcible return of the Rohingya unless their safety can be guaranteed.

The Rohingya are a stateless minority who have long experienced persecution in Myanmar, also known as Burma.

More than 600,000 have fled to neighbouring Bangladesh since violence erupted in Rakhine state late in August.

"The 'Arrangement' stipulates that the return shall commence within two months," a press release from the Bangladeshi government said.

Few other details were released following the signing of the memorandum.

Bangladesh Mahmood Ali said it was a "first step". A senior Myanmar official Myint Kyaing said it was ready to receive the Rohingya "as soon as possible".

Myanmar's conditions of return remain unclear, and many Rohingya are terrified of being sent back.

Both countries are under pressure on the issue, for different reasons.

Bangladesh wants to show its population that the Rohingya will not be permanent residents – it was already hosting about 400,000 before the latest influx.

The Burmese authorities – and particularly de facto leader Aung San Suu Kyi – are responding to international calls to do more to resolve the crisis.

The assertions contradict evidence seen by BBC correspondents of a crisis the United Nations has also called ethnic cleansing.

Pope Francis is due to arrive in Myanmar on 26 November. His visit will include meetings with army chief Gen Min Aung Hlaing and Aung San Suu Kyi, the Vatican has said.

The pontiff will later travel to the Bangladeshi capital, Dhaka, where he will meet Rohingya refugees.