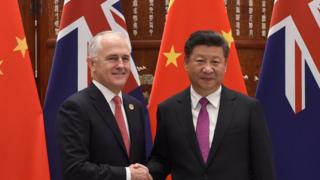 China has criticised Australia for making "irresponsible remarks" over the South China Sea in a policy paper.

On Thursday, Australia raised concerns about the "pace and scale" of China's activities in the disputed zone – part of a wide-ranging document setting out Canberra's foreign engagement strategy.

Beijing said the paper was generally positive towards China, but Australia should not get involved in the dispute.

The Australian government played down the criticism on Friday.

In a briefing on Thursday, China's foreign ministry spokesman Lu Kang noted that Australia had repeatedly pledged not to take sides over the South China Sea.

"Australia is not directly involved in the South China Sea issue," he said.

"So we would like to advise Australia to abide by its commitment and stop making irresponsible remarks on the South China Sea issue."

Australian Foreign Minister Julie Bishop told the ABC she had received feedback from Chinese officials that "they respect the stand we have taken".

What is the South China Sea dispute?

Rival countries have wrangled over territory in the South China Sea for centuries, but tension has steadily increased in recent years.

Its islets and waters are claimed in part or in whole by Taiwan, China, Vietnam, the Philippines, Malaysia and Brunei.

Beijing has been building artificial islands on reefs and carrying out naval patrols in waters also claimed by these other nations.

In July 2016, an international tribunal ruled against Chinese claims, backing a case brought by the Philippines, but Beijing said it would not respect the verdict.

The frictions have sparked concern that the area is becoming a flashpoint with global consequences.

Australia's Foreign Policy White Paper, its first since 2003, is designed to set out the country's international strategy for the next decade.

Among its key points, the document argues the US will remain crucial to Australia's security, but says Canberra must build even deeper links with China.

"Australia will encourage the United States and China to ensure economic tension between them does not fuel strategic rivalry or damage the multilateral trading system," the paper says.

However, Prime Minister Malcolm Turnbull said Australia must also take responsibility for its own "security and prosperity".

"More than ever, Australia must be sovereign, not reliant," he writes in the paper's introduction.