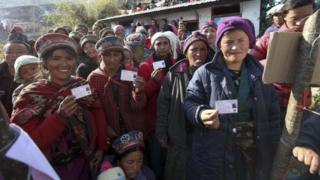 Millions of Nepalese have braved cold weather to vote in the country's first general election since a civil war ended and the monarchy was abolished.

Voters from remote villages in the Himalayas had to walk for hours in the snow to reach their polling stations.

They were choosing a 275-member parliament and provincial assemblies. Turnout was more than 65%.

The centrist Nepali Congress Party is taking on an alliance of former Maoist rebels and the Communist UML party.

The country is voting in two phases, with the second phase to be held on 7 December. Results are expected a few days after that.

More than 15 million people are eligible to vote.

"We are delighted to let you know that we have achieved historic success in holding the first phase of elections in 32 districts," chief election commissioner Ayodhee Prasad Yadav said after the polling stations closed at 11:15 GMT.

"The polls were held mostly peacefully," he added.

Voting was paused in three polling centres after an explosive device was found at one and acid was sprinkled on ballot boxes at two others, local officials said according to AFP news agency. There were no reports of injuries.

Mr Yadav said the commission would now focus its attention on the second phase of the election in the remaining 45 districts.

For the first time voters are also choosing 550 representatives to seven provincial assemblies.

The polls are the first under a new constitution, which paved the way for sweeping changes to the political system.

It was adopted in 2015 – after years of negotiations following a 10-year civil war between the security forces and Maoist insurgents.

Under the constitution, a proportion of seats in the federal and provincial assemblies will be allocated to women, people from indigenous communities and the lowest Dalit caste.

An extended period of political instability since the end of the war produced an array of different leaders and corruption burgeoned. That has impeded efforts to rebuild following the devastating earthquake in 2015.

"The government changes every nine months and don't get to do any work. Instead they fight for power. We hope that will change," farmer Gyan Bahadur Thapa told AFP after casting his ballot in Chautara.

Many in Nepal hope the election will bring much needed stability to the country, which saw 10 prime ministers in the past 11 years.

The political instability had a negative impact on the country's development.

People now hope the longevity of the governments will help to bring improvements in areas like electricity, water, healthcare and jobs.

The elections are keenly watched by Nepal's giant neighbours – China and India.

As the two countries vie for influence in the Himalayan nation, it will be a challenge for the new government to address the aspirations of Beijing and Delhi while maintaining Nepal's identity.

IcetruckNovember 26, 2017
Like story:
tweet
Black bears back in eastern Nevada after 80-year absence
Veterans are key as surge of states OK medical pot for PTSD