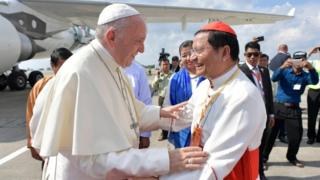 Pope Francis is set to hold talks with Myanmar's de facto leader Aung San Suu Kyi, then deliver a speech that will be keenly watched for any reference to the country's Rohingya Muslim community.

Myanmar has been accused of ethnic cleansing, with 600,000 Rohingya fleeing to Bangladesh since August.

Francis has in the past supported his Rohingya "brothers and sisters".

But the Catholic Church in Myanmar has urged him not to use the term Rohingya for fear of a backlash.

The 80-year-old Pope is on the second day of a four-day visit to the country and is travelling from Yangon to the capital, Nay Pyi Taw, where he will meet Aung San Suu Kyi and deliver his much-anticipated speech.

He has been urged by rights groups to pressure the government over its treatment of the Rohingyas.

Myanmar has denied UN accusations that the treatment of the Muslim community amounts to ethnic cleansing. It says the crackdown in Rakhine state, which began after deadly attacks on police posts by Rohingya militants, is to root out violent insurgents.

Myanmar's government also rejects the term Rohingya. It labels the Rohingya as "Bengalis" and says they migrated illegally from Bangladesh so should not be listed as one of the country's ethnic groups. Bangladesh also denies they are its citizens.

Ms Suu Kyi, who is also expected to speak, has been criticised for her lack of action. On Monday, the Nobel Peace Prize winner was stripped of the Freedom of the English city of Oxford, with local councillors saying they no longer wished to honour those who turned a blind eye to violence.

The BBC's Jonathan Head, in Yangon, says the pontiff is expected to outline his views on how religious tolerance should be built but the wording will be closely watched.

He says the Pope cannot avoid an issue on which he he has been blunt in the past, but if he does become too outspoken, the Buddhist majority here will just not listen to him – so he has a very fine line to tread.

In a Facebook post, the general said he had told the Pope: "There is no religious discrimination in Myanmar as the country ensures religious freedom."

On Wednesday, the Pope is to celebrate a huge Mass in Yangon, which some 200,000 Myanmar Catholics, about 40% of the country's Catholic community, are expected to attend.

One Catholic who will attend, Daw Ja Hpang, told Reuters: "I'm extremely excited because I thought I would never see the Pope in my life."

After Myanmar, Francis will move on to Bangladesh to meet a small group of Rohingya refugees in a symbolic gesture.

The Pope's trip was planned before the violence erupted in Myanmar in August.