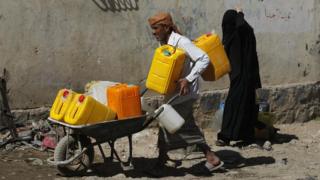 The International Committee of the Red Cross is buying 750,000 litres of diesel fuel to help provide clean water for a million people living in Yemen.

Nine cities ran out of clean water this month because a blockade by a Saudi-led coalition prevented imports of fuel needed for pumping and sanitation.

The ICRC's fuel purchase will allow the water systems in two cities, Hudaydah and Taiz, to operate for a month.

The organisation described the move as "exceptional and unsustainable".

Remaining fuel stocks, some available only on the black market, have rocketed in price leaving local water boards unable to afford them.

The coalition, which has backed the Yemeni government in its war with the rebel Houthi movement since 2015, closed Yemen's borders to stop alleged weapons smuggling on 6 November after a missile was fired at the Saudi capital Riyadh.

Aid deliveries to rebel-held sea and air ports have since been allowed to resume, but only a few flights and two ships have so far arrived.

The ICRC and other humanitarian organisations say aid alone is not sufficient to provide for the needs of Yemen's 27 million people, and have called on the coalition to immediately permit commercial shipments of food and fuel.

Yemen is reliant on imports for more than 90% of its needs, and it faced the largest food security emergency in the world even before the blockade was tightened.

More than 2.5 million people across Yemen are currently without access to clean water as a result, according to the ICRC.

On Wednesday, ICRC spokeswoman Iolanda Jaquemet said it had decided to purchase fuel to supply the water boards in Hudaydah and Taiz as a last resort.

The organisation's Middle East regional director, Roberto Mardini, wrote on Twitter that it was "not supposed to do this", adding that "fuel imports must resume".

Without access to clean water and sanitation, Yemenis living in crowded urban areas are at risk of a renewed cholera outbreak and other water-borne diseases.

In Hudaydah, untreated sewage has been flooding the streets regularly.

Before the blockade was tightened, Yemen was slowly emerging from what the ICRC called the worst cholera outbreak in modern times, with 945,000 suspected cases and 2,211 associated deaths.

Some 17 million people in Yemen do not know where their next meal is coming from and seven million are totally dependent on food assistance. Severe acute malnutrition is threatening the lives of almost 400,000 children.

IcetruckNovember 29, 2017
Like story:
tweet
2 big Uber investors agree to sell shares in SoftBank deal
US female migrant detainees ‘given bags to use as toilets’