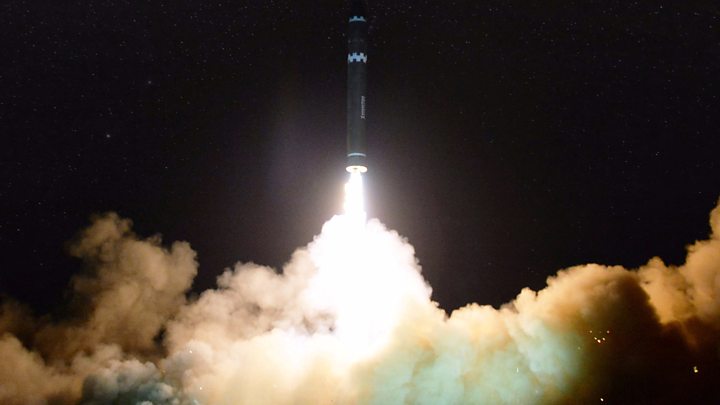 North Korea: US urges all nations to cut ties

The US has urged all nations to cut diplomatic and trade ties with North Korea after the country's latest ballistic missile test.

Speaking at the UN Security Council, US envoy Nikki Haley said President Trump had asked his Chinese counterpart to cut off oil supplies to Pyongyang.

She said the US did not seek conflict but that North Korea's regime would be "utterly destroyed" if war broke out.

The warning came after Pyongyang tested its first missile in two months.

North Korea said the missile fired on Wednesday, which it said reached an altitude of about 4,475km (2,780 miles) – more than 10 times the height of the International Space Station – carried a warhead capable of re-entering the Earth's atmosphere.

The claim was not proven and experts have cast doubt on the country's ability to master such technology.

However, North Korea's leader Kim Jong-un called the launch "impeccable" and a "breakthrough".

The test – one of several this year – has been condemned by the international community and the UN Security Council called an emergency meeting.

Ms Haley warned that "continued acts of aggression" were only serving to further destabilise the region.

"The Americans should explain to all of us what they are trying to do – if they want to find a pretext for destroying North Korea they should come clean about it, and the American leadership should confirm it," he told reporters.

Earlier Russia's UN ambassador said North Korea should stop its missile and nuclear tests but also called on Washington to cancel military exercises with South Korea planned for December as it would "inflame an already explosive situation".

China also suggested the North should stop the tests in return for a halt to US military exercises – a proposal Washington has rejected in the past.

"We need China to do more," Ms Haley said on Wednesday. "President Trump called President Xi this morning and told him that we've come to the point where China must cut off the oil for North Korea.

"We know the main driver of its nuclear production is oil," she said. "The major supplier of that oil is China."

China is a historic ally and North Korea's most important trading partner and Pyongyang is thought to be dependent on China for much of its oil supplies.

Earlier on Wednesday, the White House said that Mr Trump spoke to Xi Jinping by telephone, urging him to "use all available levers to convince North Korea to end its provocations and return to the path of denuclearisation".

Just spoke to President XI JINPING of China concerning the provocative actions of North Korea. Additional major sanctions will be imposed on North Korea today. This situation will be handled!

Speaking in Missouri, the US leader derided Mr Kim, describing him as a "sick puppy" and "little rocket man".

Experts say the height reached by the inter-continental ballistic missile (ICBM) indicates Washington could be within range, although North Korea is yet to prove it has reached its aim of miniaturising a nuclear warhead.

The Hwasong-15 missile, described as North Korea's "most powerful", was launched in darkness early on Wednesday.

Chinese state media are blaming the US relisting of North Korea as a state sponsor of terrorism for its latest missile test.

An editorial in the Global Times said US policy on North Korea had "been nothing but an abysmal failure" in wrongly assuming that it could force Pyongyang to abandon its weapons programme by applying more pressure on the country.

The newspaper warned that China would "not support a new round of Trump administration pressure tactics" but also reminded North Korea that the international community would never accept it as a nuclear-armed state.

"Washington has placed China in a precarious situation by asking for more than what was originally expected by the UN Security Council regarding the previous round of North Korea sanctions. China has always carried out UN security measures," the editorial said.

The English-language China Daily said: "A golden opportunity to build concerted momentum to encourage Pyongyang to engage in talks has been so casually wasted by the Trump administration's recent action of renaming Pyongyang a sponsor of state terrorism, which may have prompted Pyongyang's latest missile launch."