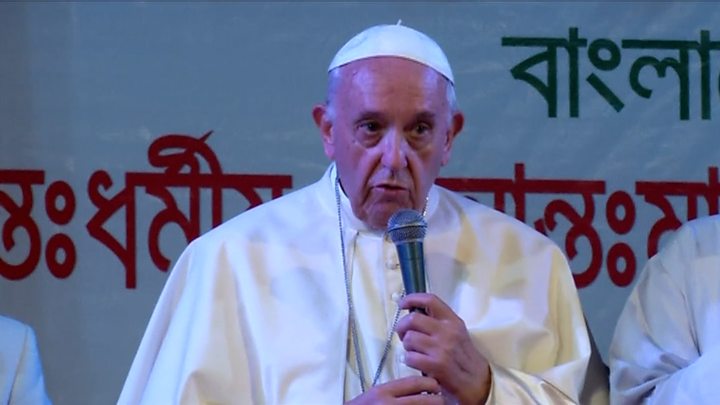 Pope Francis has met a group of Muslim Rohingya refugees in Bangladesh and referred to them by name for the first time on his Asian visit.

The Pope told a group of 16 refugees at an interfaith meeting in the capital Dhaka: "The presence of God today is also called Rohingya."

He refrained from using the term on his earlier visit to Myanmar, which does not regard Rohingya as an ethnic group.

Some 620,000 Rohingya refugees have fled Myanmar since August.

The Pope had been criticised by rights groups for not using the term in Myanmar, whose military has been accused of ethnic cleansing by the United Nations. He had used the term before his visit.

It was a poignant moment when Pope Francis met Rohingya refugees in Dhaka. One by one they went up on stage and met him. He held their hands and they each had a chance to say a few words to him. He placed his hand on the head of a little girl who was part of the group.

Then in a short speech that was not part of the original programme Pope Francis used the contentious word "Rohingya" for the first time sending out his strongest message so far about the crisis during his visit to Myanmar and Bangladesh.

But does it really make a difference especially since he didn't use the word or speak directly about the issue in Myanmar, the country that matters? Mark Pierce from Save the Children told me his organisation would certainly have preferred the Pope to be more vocal about the crisis in Myanmar but says it is significant that he has spoken about it here in Bangladesh because it helps keep the spotlight on the plight of the refugees.

About 3,000 refugees are estimated to have crossed over from Myanmar to Cox's Bazaar in Bangladesh in the past week alone adding to the hundreds of thousands who are already there living in camps.

While there is an agreement between the governments of Bangladesh and Myanmar for the refugees to return, there are still no details of when or how this will happen.

Pope Francis' comment to refugees in Dhaka was made in an improvised remark and was not in his speech to the interfaith meeting.

"In the name of all of those who have persecuted you, hurt you, I ask forgiveness," Pope Francis told the refugees. "I appeal to your large hearts to give us the forgiveness that we are asking."

Rights groups had urged the Pope to use the term Rohingya to back the community.

However, he had been warned by Catholic representatives in Myanmar not to use the term for fear of alienating the Buddhist majority.

The number of Catholics in Bangladesh is very small. The 350,000-strong community makes up 0.2% of the population.

On the penultimate day of his Asia trip, he told the crowd: "I know that many of you came from afar, for a trip for more than two days. Thank you for your generosity. This indicates the love you have for the Church."

IcetruckDecember 1, 2017
Like story:
tweet
WATCH: Denzel Washington on why he loves the character in his newest role
Geraldo Rivera apologizes to Bette Midler for alleged groping incident