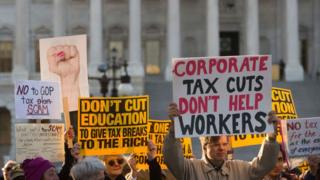 Republicans who control the US Senate say they are confident of passing the biggest tax cuts since the Reagan era as soon as Friday.

Party leaders sounded bullish after three Republican holdouts said yes despite a Senate committee finding it would add $1tn (£742bn) to the deficit.

The committee's report contradicts a White House claim that economic growth would compensate for the tax cuts.

The nonpartisan Senate Joint Committee on Taxation found on Thursday that the Tax Cuts and Jobs Act would add significantly to the federal deficit over a decade.

But Senators Ron Johnson, Jeff Flake and Steve Daines said on Friday they would support the legislation, which includes steep corporate tax cuts.

Mr Daines, of Montana, and Mr Johnson, of Wisconsin, and Mr Flake, of Arizona, were among a dwindling band of Republicans on the fence.

John Cornyn, majority whip of the chamber, said he is confident the party has the votes to pass the bill.

"We are confident of the 50 and would like to build on that," he said.

Senate Republicans can afford to lose just two members of their party if they are to succeed.

The votes of Senators Bob Corker of Tennessee and James Lankford of Oklahoma were also being courted by the Republican leadership.

The party's fiscal conservatives have for years lamented the nation's debt time bomb.

But despite the Senate committee's deficit warning, the party is full steam ahead on the bill.

If it passes, the Senate would need to merge its legislation with that passed last month by the House of Representatives.

The reconciled bill would then be sent to the president's desk for his signature to be enacted into law.

How do House and Senate bills compare?

What is in the bill?

The details of the Senate bill remain in flux.

The heart of the proposal is a move to slash the corporate rate from 35% to 20%, a move that supporters say will make the US more competitive. But as a vote nears, some senators have raised the possibility of lowering the rate to 22%, in an effort to reduce the cost of the proposal.

The plan would also boost the amount individuals and families can deduct from their tax bill, while eliminating other targeted benefits. That change is meant to simplify tax filing for the average household.

But the bill's effects would be much broader.

For example, the Senate has proposed eliminating a requirement that people have health insurance – a change that would rock US insurance markets.

Wall Street expects to benefit from lower rates, as companies use additional cash to buy back shares or pay out higher dividends.

But the effects of the changes are mixed for households.

Wealthy families would benefit from proposals such as one that would increase the amount exempt from inheritance tax.

Analyses suggest some lower- and middle-class families would eventually see higher bills as other benefits expire.

One of the most controversial parts of the bill is a measure that would stop allowing families to deduct their state and local taxes from their federal bills. The issue is especially important in high-tax states, many of which are Democratic.