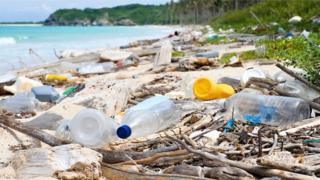 A plan for zero tolerance of plastic pollution of the oceans may be agreed by nations at a UN environment summit.

Governments are being asked to move towards a legal treaty banning plastic waste from entering the sea.

At the moment ships are prohibited from dumping plastic overboard but there's no international law against plastics flooding into the sea from the land.

Delegates in Nairobi preparing the way for the UN's environment ministers meeting next week are said to be in broad agreement on the need for tougher action to combat the plastics crisis.

They are setting up a working party to explore options for global action to tackle plastic waste and microplastics.

The US has volunteered to take part, but is traditionally resistant to agreeing any international laws.

One idea is to mirror the model of the Paris climate agreement.

In that deal, the framework of reporting emissions cuts and agreeing long-term goals is legally binding – but the national actions themselves are voluntarily determined.

Environmentalists say getting better information on how much plastic is flowing into the sea from what sources would be a major step.

The UN has already committed to substantial reduction of plastic waste by 2025 but a resolution led by Norway says the long-term aim must be for zero plastic waste.

It also wants to clean up of existing plastic from beaches. It says this is better value for money and better for the environment than some of the large-scale clean-up experiments currently in the mid Pacific – which it fears may harm wildlife.

Cleaning up beach plastic is especially important, it says, because abrasion breaks down large plastics into very harmful microplastics.

The conference will also hear that stronger leadership and co-ordination is needed – either from a strengthened UN Environment Programme, or perhaps even a new UN plastics agency.

Norway wants governments to compile an assessment of exactly how much waste plastic is getting into the sea from their territory. It admits this won't be easy.

A source close to the talks told BBC News: "There are many questions to be solved. Should there be a legally binding instrument prohibiting plastic from the land?

"If not, what other sort of overarching action should there be? We are grappling with this huge issue in its early stages."

China – the world's biggest plastics polluter – is said to be cautious about being bound by global rules.

Other big polluters like India and Indonesia are said to be generally supportive about the resolutions.

India's Prime Minister Narendra Modi recently applauded the clean-up of plastic from a beach in Mumbai, saying: "It is our duty to protect the environment for our future generations."

Eirik Lindebjerg from WWF said the Nairobi meeting could prove a turning point in the plastics crisis. He told BBC News: "The treaties on climate change and biodiversity were initiated in this forum – so it has a track record of making things happen.

"Plastics is one of those issues that clearly needs global agreement with maybe eight million tonnes ending up in the ocean.

"Plastic flows are huge and damaging; they flow across borders. We absolutely have to stop allowing plastics into the ocean – and this meeting looks like it could prove a very important start."

The meeting will also discuss pollution of the air and water. A global ban on lead in paints may be approved.