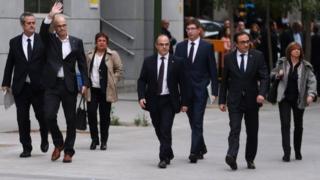 Two senior figures in the sacked Catalan separatist government must stay in jail but six others can go free, a Spanish supreme court judge has ruled.

The separatists were remanded in custody last month. Catalan ex-President Carles Puigdemont fled to Belgium. All are accused of sedition.

Spain feared the others could flee too.

The ruling came a day before the start of campaigning for the 21 December Catalan regional election.

The eight politicians are accused of rebellion and sedition over the region's illegal declaration of independence in October.

A new opinion poll suggests that pro-independence parties will fall narrowly short of an absolute majority in the December election. It was conducted by the Spanish Centre for Sociological Research (CIS) among Catalan voters in late November.

Mr Puigdemont and four other ex-ministers also appeared in court in Brussels on Monday. Spain wants them to be extradited, and a lawyer for Mr Puigdemont tweeted that a Belgian judge would decide on 14 December.

After the Catalan independence referendum and declaration of a "republic", Spain imposed direct rule on the region and called early elections there.

Eight ex-ministers have been in Spanish prisons since 2 November.

He and the others remaining in jail were, according to the Madrid judge, responsible for instigating violence in the run-up to the independence declaration.

Those freed on bail are:

The bail conditions state that they must report every week to a judge in Catalonia, they cannot leave Spain and they have to surrender their passports.

In Belgium, the defence lawyers for Mr Puigdemont and his aides urged the authorities not to send them back to Spain because they would be at risk of "a violation of legal safeguards" were they to face trial.

They also argued that extradition would be wrong because the European Arrest Warrant issued by Spain listed crimes which had no equivalent in Belgian law.

IcetruckDecember 4, 2017
Like story:
tweet
Future of UK care firm hangs in the balance
Zoe Kravitz says she did not watch TV growing up