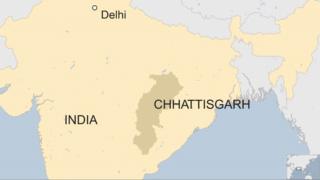 The driver of a school van in the central Indian state of Chhattisgarh risked his own life to save the lives of his child passengers on Tuesday.

Shiv Yadav had parked his van on the side of a busy road to relieve himself when he realised the children had accidently put the van in gear.

He rushed to stop the van and threw himself in front it. The front tyres ran over him before the van stopped.

Mr Yadav is in a critical condition in hospital with injuries to his spine.

Accidents involving school vans are common in India because of poor maintenance and overcrowding.

In January, 15 children died after their bus crashed into a lorry in the northern state of Uttar Pradesh.