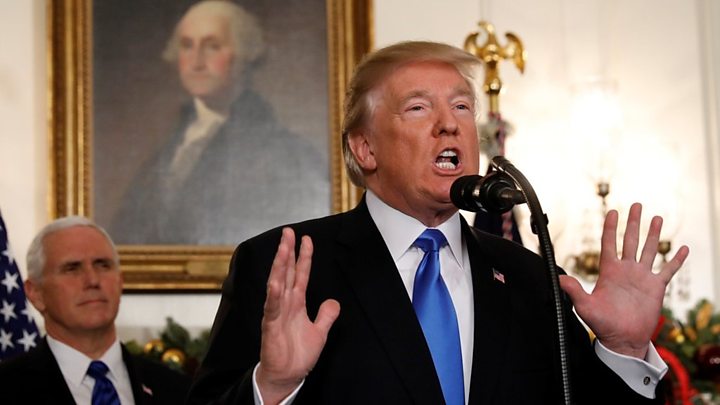 President Donald Trump has announced that the US now recognises Jerusalem as Israel's capital, overturning decades of official US policy.

The fate of the ancient city is one of the thorniest issues between Israel and the Palestinians.

Israel called Mr Trump's move "historic" but there has been sharp international criticism.

Mr Trump said the US still supported a two-state solution to the longstanding conflict, if approved by both sides, which would essentially see the creation of an independent Palestinian state living alongside Israel.

Palestinian President Mahmoud Abbas called Mr Trump's announcement "deplorable", saying the US could no longer be a peace broker.

Eight of the 15 nations who are currently members of the United Nations Security Council have called for the body to hold an urgent meeting on the US decision by the end of the week.

Why is this significant?

The decision to recognise Jerusalem as Israel's capital puts the US at odds with the rest of the international community's view on Jerusalem's status.

The Palestinians claim East Jerusalem as the capital of a future state, and according to the 1993 Israel-Palestinian peace accords, its final status is meant to be discussed in the latter stages of peace talks.

Israeli sovereignty over Jerusalem has never been recognised internationally, and until now all countries have maintained their embassies in Tel Aviv.

Speaking at the White House, the US president said he had "judged this course of action to be in the best interests of the United States of America, and the pursuit of peace between Israel and the Palestinians".

"Today, I am delivering," the US leader said, referencing the campaign pledge.

The Republican Jewish Coalition have already thanked the president in a New York Times ad. The group is backed by Republican and Trump campaign mega-donor Sheldon Adelson.

The president emphasised several times that he was delivering on a campaign promise, signalling that domestic politics was largely what motivated this controversial decision.

The announcement would have made more sense as part of a peace plan, but the White House is still drafting one. So the president spent much of the speech pushing back against criticism that he was prejudging his own peace initiative.

He insisted that the US was still deeply committed to facilitating a deal acceptable to both sides, and was not taking a position on the final status of the holy city.

That seemed to imply the Palestinian claim to occupied East Jerusalem would still be on the table in any negotiations. But his argument would have been more convincing to them if he had spelled that out, and if he had clearly stated that the end goal was two states.

What do Israel and the Palestinians say?

In response, Israeli Prime Minister Benjamin Netanyahu said it was a historic day, and Israel was profoundly grateful to President Trump.

"Jerusalem has been the focus of our hopes, our dreams, our prayers for three millennia," he tweeted.

Mr Abbas, the Palestinian leader, said in a pre-recorded TV speech that the city was the "eternal capital of the state of Palestine".

He earlier warned of "dangerous consequences" through a spokesman, a sentiment echoed by other Arab leaders, who said there could be unrest.

There were demonstrations in Gaza against the decision before it was announced in response to a call from the Islamist Hamas movement that runs the Gaza strip, local pro-Hamas media reported.

Hamas said that Mr Trump's decision would "open the doors of hell" on US interests in the region.

What does the rest of the world say?

The US decision comes despite vocal opposition in the Muslim world, even among US allies.

On Tuesday Saudi Arabia's King Salman had said that the move "would constitute a flagrant provocation of Muslims, all over the world".

Demonstrations have already taken place in Gaza and outside the US consulate in Istanbul, Turkey.

UN Secretary General Antonio Guterres said it was "a moment of great anxiety".

"There is no alternative to the two-state solution. There is no Plan B," he said.