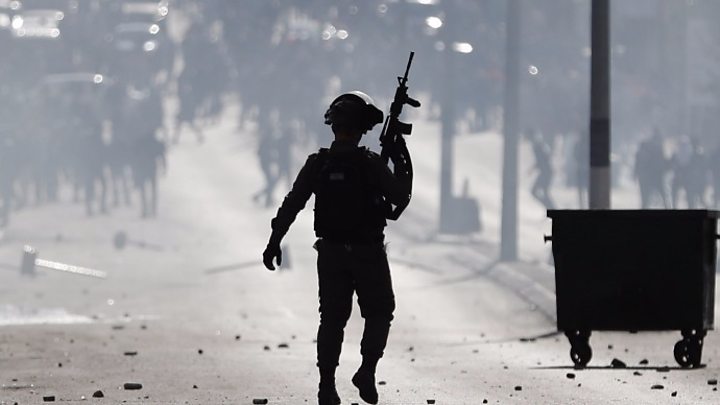 At least 16 Palestinians have been wounded in clashes in the occupied West Bank, during protests against US President Donald Trump's recognition of Jerusalem as Israel's capital.

Reports suggest the injuries are mostly from tear gas and rubber bullets, but at least one was hurt by live fire.

Israel has deployed hundreds of extra troops in the West Bank.

Mr Trump's announcement – met with worldwide dismay – reversed decades of US policy on the sensitive issue.

Palestinians in the both the West Bank and the Gaza Strip have gone on strike and taken to the streets in protest.

Many of Washington's closest allies have said they disagree with the move, and both the UN Security Council and the Arab League will meet in the coming days to decide their response.

There are fears the announcement could lead to a renewed outbreak of violence. The Palestinian Islamist group Hamas has already called for a new intifada, or uprising.

The US president said on Wednesday that he had "determined it is time to officially recognize Jerusalem as the capital of Israel".

"I've judged this course of action to be in the best interests of the United States of America and the pursuit of peace between Israel and the Palestinians," he said.

Mr Trump said the US would support a two-state solution – shorthand for a final settlement that would see the creation of an independent Palestinian state within pre-1967 ceasefire lines in the West Bank, Gaza Strip and East Jerusalem, living peacefully alongside Israel – "if agreed to by both sides".

The president also refrained from using Israel's description of Jerusalem as its "eternal and undivided capital". The Palestinians want East Jerusalem to be the capital of any future Palestinian state.

Israeli Prime Minister Benjamin Netanyahu said Israel was profoundly grateful to Mr Trump, who had "bound himself forever with the history of the capital".

He also said Israel was "in touch with other countries to follow suit. I have no doubt other embassies will move to Jerusalem – the time has come". He did not name any of these countries, although the Philippines and the Czech Republic have been mentioned in Israeli media.

The mood has been very different on the Palestinian side.

Ismail Haniyeh, the leader of Hamas which runs the Gaza Strip, has called for a "day of rage" on Friday and said it should "be the first day of the intifada against the occupier".

"We have given instructions to all Hamas members and to all its wings to be fully ready for any new instructions or orders that may be given to confront this strategic danger," he said in a speech in Gaza.

Meanwhile, Palestinian President Mahmoud Abbas' rival Fatah movement is seeking to protest through diplomatic means, by filing a complaint to the UN Security Council and pushing for a strong stance by the Arab League.

"We are going to declare the United States disqualified as co-sponsor of any peace process or political process," spokesman Dr Nasser Al-Kidwa said. "In our mind, it has lost its ability to do or perform any efforts in this regard."

There has also been widespread condemnation across the Arab and wider Muslim world, with Turkey's President Recep Tayyip Erdogan warning Mr Trump that he was "throwing the region into a ring of fire".

The leaders of the UK, France and Europe have all said they disagree with the US announcement. French President Emmanuel Macron said it contravened international law and UN Security Council resolutions.

Why is the announcement significant?

Jerusalem is of huge importance to both Israel and the Palestinians. It contains sites sacred to the three major monotheistic faiths – Judaism, Islam and Christianity.

Israeli sovereignty over Jerusalem has never been recognised internationally, and all countries maintain their embassies in Tel Aviv.

East Jerusalem, which includes the Old City, was annexed by Israel after the Six Day War of 1967, but before now it has not been internationally recognised as part of Israel.

According to the 1993 Israel-Palestinian peace accords, the final status of Jerusalem is meant to be discussed in the latter stages of peace talks.