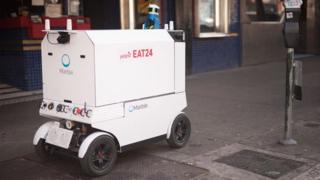 San Francisco officials have voted to restrict where delivery robots can go in the city, in a blow for the burgeoning industry.

Start-ups will have to get permits to use such bots, which will be restricted to less crowded urban areas.

Opponents are concerned about the safety of pedestrians, particularly elderly people and children.

A range of companies have begun trialling small robots that can deliver food and other goods.

They use sensors and lasers in a similar way to self-driving cars in order to navigate their routes.

Other companies, such as Starship and Postmates, are also keen to use pavements for robot deliveries.

San Francisco supervisor Norman Yee, who originally proposed a ban on such robots, has previously said that the city's streets "are for people, not robots".

Despite its proximity to Silicon Valley, San Francisco is falling behind other states such as Virginia and Idaho where there are already laws permitting delivery robots to operate.

The San Francisco Chamber of Commerce lobbied against an all-out ban of such robots, saying that "could create a massive barrier to future innovation in the industry".

In October the legislation was reframed to look at regulation rather than a ban.