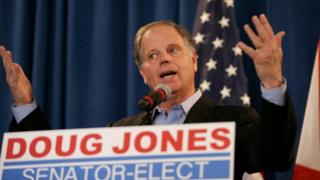 Democrat Doug Jones has been certified as the winner of the Alabama senate race despite a last-ditch lawsuit by the defeated Republican Roy Moore.

Mr Moore had been expected to win the conservative state but he was dogged by allegations of child sexual misconduct.

Mr Jones will be sworn in by Vice-President Mike Pence on 3 January.

The former Alabama supreme court judge's lawsuit, filed late on Wednesday, alleged that there were voting irregularities in 20 precincts, which amounted to "systemic election fraud".

The lawsuit, which was dismissed by a judge on Thursday, called for a fraud investigation and a new election.

A spokesman for the Jones campaign, Sam Coleman, called it a "desperate attempt by Roy Moore to subvert the will of the people".

"The election is over, it's time to move on," he added.

Donald Trump tumbles to earth with a bump

Mr Moore, who was the first Republican to lose an Alabama senate race since 1992, never conceded defeat.

The election result was certified by the state canvassing board, which is made up of the governor, secretary of state, and the attorney general – all elected Republicans.

Secretary of State John Merrill said that all allegations of voter fraud were properly investigated, and were determined to be unfounded.

Conspiracy theories have spread in online conservative groups since the election, alleging without evidence that black voters were bussed in from other states to vote for Mr Jones.

Mr Merrill said that one report of a suspiciously high voting turnout in a community that does not exist was perpetuated by "somebody [who] just made that up and started circulating it on the internet".

The final tally finds that Mr Jones won by a margin of 21,924 votes out of more than 1.3 million cast.

The election result was a blow to President Donald Trump, who gave Mr Moore his full-throated support, even as other Republicans distanced themselves following the misconduct allegations.

Four women allege that Mr Moore, then in his early thirties, assaulted, molested or pursued them when they were teenagers, including sexually touching one when she was 14.

He denies the allegations and says they are politically motivated. His supporters, including his wife Kayla Moore, have promoted unfounded theories that his accusers were paid.

Mr Moore has provoked controversy throughout his political career, suggesting that 9/11 happened because of declining Christian values, calling for Muslims to be barred from office, and strongly opposing gay marriage.