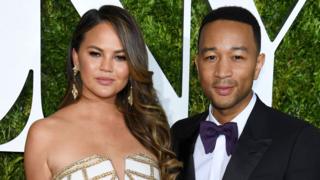 John Legend and Chrissy Teigen make it to Japan – eventually

Model Chrissy Teigen and her musician husband John Legend have made it to Japan after their initial flight from Los Angeles was turned around mid-air.

The ANA plane turned back four hours into its journey to Tokyo, reportedly because a passenger boarded in error.

Teigen documented the drama on Twitter and continued to live tweet once she and Legend were put on another plane.

The model, who is expecting her second child, also explained why she and her husband had not used a private jet.

"A lot of people have been asking this and I would just like you all to know that a round trip international private flight is like…300,000 dollars," she tweeted on Wednesday.

According to US media, the mix-up happened after two brothers who were both bound for Tokyo were seated on the same flight, despite one of the siblings having booked with a different airline.

ANA said only that there had been a problem with a customer's "flight arrangement".

A lot of people have been asking this and I would just like you all to know that a round trip international private flight is like…300,000 dollars https://t.co/ruHWLmPT6z

As a consequence of the delay, Teigen and Legend ended up celebrating his 39th birthday miles above the Pacific Ocean.

Teigen also revealed that she and her husband had decided to remain in Tokyo upon landing after missing a connecting flight to the Japanese city of Nagoya.

We uhhhhh went ahead and cancelled our connecting flight to nagoya and 3 hour car ride for…obvious reasons…but are happy to stay here in Tokyo! We feel like young lovers again. Been a while since the ramen adventures of 2012!

Teigen's running commentary on the mid-air mix-up made headlines around the world and led to ANA (All Nippon Airways) issuing an apology.

We apologize to all of our passengers on Flight 175; we failed to deliver the customer service we strive for. Thank you all for your comments and allowing us to connect, learn and serve you better. We welcome ongoing feedback to understand how we can work to make this right.

Yet Teigen wasn't done, asking on social media why it was deemed necessary to turn the flight around and inconvenience all the other passengers.

"Honestly everyone on the ground and in the air were very kind and apologetic," she tweeted.

"But I just need to know why we couldn't have flown to Tokyo and settled this one person's mistake (who was going to Tokyo all along) there, in Tokyo."

Once safely on Japanese soil, though, the pregnant 32-year-old began to see the funny side.

"I don't know why I'm not more upset about this," she wrote. "The pleasure I get out of the story is worth more to me than a direct flight to Tokyo."

Her husband pointed out that they were at least offered free Wifi once landing at Tokyo's Narita Airport.