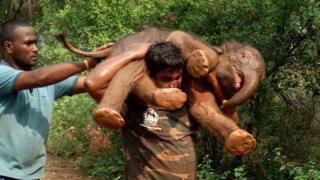 India elephant rescue: The forest guard who saved a calf

A forest guard in southern India has made headlines by saving a baby elephant that fell into a ditch and became separated from its mother.

Palanichamy Sarathkumar, 28, has been inundated with messages of support since news of the rescue in Tamil Nadu state emerged at the weekend.

Many wanted to know how he carried the animal, which weighs more than he does.

"It was very heavy. I just lifted it on the spur of the moment," he said. Calf and mother were later reunited.

Mr Sarathkumar is part of a forest team stationed near Mettupalayam, 50km (32 miles) away from Ooty hill station.

"After the video of me lifting the calf was shown on local TV channels and social media, many called to congratulate me," he told the BBC.

"Everyone in my village is now asking me the same question. How did you lift an elephant?

"I was scared of losing my balance. But my friends stepped in and restrained the calf a bit and helped me to carry the animal."

The rescue happened on 12 December when Mr Sarathkumar took a call as he was heading home after a night shift.

"The caller informed me that a female elephant was blocking the road near the Vanabhadra Kaliamman temple."

He and his colleagues managed to drive the elephant back in to the jungle using fire crackers. The team then searched the area for other elephants.

"We saw this calf stuck inside a small ditch," he said. "It was tired and confused so we moved a big boulder that was blocking its way and brought it out."

They realised the calf was the reason for the female's distress and started trying to reunite them, but the calf was too weak to walk.

"Initially four of us carried the calf," said Mr Sarathkumar. "We wanted to take it to the other side of the road to reunite it with its mother. But there was a danger of being attacked as she was still nearby.

"So, instead of all four of us being put at risk, I decided to carry the calf by myself across the road."

After carrying the baby elephant for about 50 metres, he put it down near a water hole, hoping the mother would find it.

"We waited many hours but she didn't turn up. Sensing our presence might have been making her hesitant, we all withdrew.

"Next day when I went there, the calf wasn't there. But I could see the pugmarks of a big elephant on the forest floor. It seems they were reunited before dawn and slipped away into the forest."

Elephants are highly evolved, social animals which live in large herds. Forest officials say the calf would have died if they had not intervened.

Palanichamy Sarathkumar works in the Anti-Poaching Squad and joined the forest department after witnessing conflict between humans and elephants in Tamil Nadu.

IcetruckDecember 29, 2017
Like story:
tweet
How to Create a Promotion Strategy for a Massage Service
AP Exclusive: China’s Uighurs grapple with pull of extremism