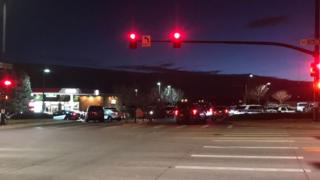 A police officer has been killed and four others have been injured in an "ambush-style attack" while responding to a verbal disturbance in Colorado.

The shooting happened at an apartment at Highlands Ranch, south of Denver.

Authorities confirmed two civilians, thought to be the shooter's neighbours, were also shot before the suspect was shot and killed by officers.

Residents in the area were put on "code red" alert and told to stay inside away from windows during the incident.

People were told to avoid the area while Swat officers responded. A bomb squad was also pictured at the scene.

A Code Red was sent out regarding this incident. Any citizens in the affected area are instructed to shelter in place, avoid windows and stay away from exterior walls. pic.twitter.com/RgutCEqgJA

At a news conference, Douglas County Sheriff Tony Spurlock confirmed the dead officer was 29-year-old Zackari Parrish, who was married with two children.

He and the other officers were called to the property at about 05:00 (12:00 GMT) after neighbours confirmed about a verbal disturbance involving two male roommates at the property.

After being let into the apartment, they were shot by the suspect, who police say was known to law enforcement but did not have a criminal record.

Authorities say he used a rifle to fire at least 100 rounds before being killed. His identity has not yet been released while formal identification takes place.

Sheriff Spurlock confirmed the four injured officers, aged between 28 and 41, are in a stable condition.

Police also say the two injured civilians do not have life threatening injuries.

Officer Parish's body was escorted from hospital by a procession of dozens of law enforcement vehicles late on Sunday morning.

My deepest condolences to the victims of the terrible shooting in Douglas County @DCSheriff, and their families. We love our police and law enforcement – God Bless them all! #LESM

President Trump offered his condolences to the victims of the shooting on Twitter.

Colorado has seen some of the worst mass shootings in US history, including the 1999 Columbine High School shooting in which 13 people, including 12 students, were killed.

It happened just outside of the town of Littleton, which neighbours Highlands Ranch where Sunday's incident happened.

Over 15,000 people have been killed by guns in the United States in 2017, according to a list compiled by tracking website Gun Violence Archive.

That figure does not include an estimated 22,000 annual suicides using firearms.

IcetruckDecember 31, 2017
Like story:
tweet
Crowds pack into a frigid Times Square for 2018 celebration
Iran protests: Citizens have right to criticise, not destroy – Rouhani