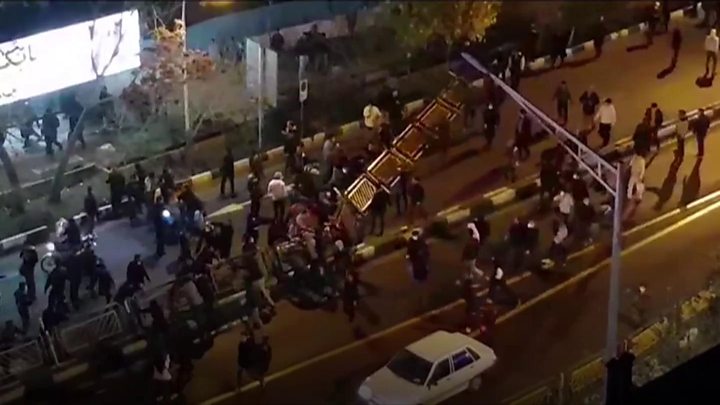 Protests in Iran continued late into Monday, despite the president saying that the unrest "is nothing".

Anti-government chanting and burning cars were reported on the fifth day of unrest, while police said an officer was killed in a central city and others wounded.

At least 13 people are believed to have died in the clashes so far.

President Hassan Rouhani said protests were an "opportunity, not a threat" but vowed to crack down on "lawbreakers".

The US meanwhile stepped up support for the protesters' "bold resistance".

The protests began last Thursday in the city of Mashhad, initially against price rises and corruption but now with wider anti-government sentiment.

Reports from Monday's events spoke of a heavy police presence in the capital.

The Mehr news agency reported a taxi being set alight. Police had used tear gas and water cannon the previous evening to quell a rally in Tehran's Engheleb Square.

State media were also quoting a police spokesman as saying that shots had been fired at police in Najafabad, near Isfahan in central Iran, killing one officer and wounding three.

Reuters news agency reported that a police station in the town of Qahderijan was partly set on fire amid clashes between security forces and protesters trying to occupy the building. Unconfirmed reports suggested several casualties, it added.

Social media postings spoke of fresh protests in Birjand in the east, Kermanshah in the west and Shadegan in the far south-west.

Initially, state TV said that 10 people had been killed overnight on Sunday, but by Monday evening that figure had been raised to 13 by a regional governor:

What did the president say?

In a statement on the presidency website, Mr Rouhani sought to play down the violence.

He said: "This is nothing. Criticism and protest are an opportunity not a threat."

But he also vowed to act against "rioters and lawbreakers".

"Our nation will deal with this minority who chant slogans against the law and people's wishes, and insult the sanctities and values of the revolution," he said.

A later tweet appeared more conciliatory, saying that the government needed to pay attention to people's demands on livelihood issues and corruption.

Judiciary Chief Ayatollah Sadeq Amoli-Larijani on Monday called for a crackdown on "rioters" and "vandals".

"Some individuals are exploiting the situation. This is wrong," he said.

Up to 400 people are reported to have been arrested in recent days.

What has the US said?

President Donald Trump stepped his war of words with Iran's leaders on Monday, posting a tweet saying the "great Iranian people have been repressed for many years. They are hungry for food and freedom".

Iran is failing at every level despite the terrible deal made with them by the Obama Administration. The great Iranian people have been repressed for many years. They are hungry for food & for freedom. Along with human rights, the wealth of Iran is being looted. TIME FOR CHANGE!

He added in capital letters "TIME FOR CHANGE!"

He tweeted: "The bold and growing resistance of the Iranian people today gives hope and faith to all who struggle for freedom and against tyranny. We must not and we will not let them down."

He spoke of the "shameful mistake" of not supporting previous Iranian protesters.

The protests were brutally suppressed, with at least 30 people killed and thousands arrested.

The latest US approach has infuriated Iran.

Mr Rouhani described the US president as an "enemy of the Iranian nation from the top of his head to his very toes".

The EU, meanwhile, called on Iran to guarantee its citizens' right to peaceful protest, saying it had been in touch with Iranian authorities and was monitoring the situation.

"We believe that there should be meaningful debate about the legitimate and important issues the protesters are raising and we look to the Iranian authorities to permit this", he said.