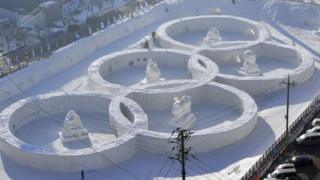 South Korea has offered high level talks with North Korea on 9 January to discuss its possible participation in the 2018 Winter Olympic Games.

It comes after the North's leader Kim Jong-un said he was considering sending a team to Pyeongchang in South Korea for the Games in February.

He said the two sides should "urgently meet to discuss the possibility".

South Korea's president said earlier he saw the offer as a chance to improve the highly tense relationship.

The village, in the heavily guarded demilitarised zone (DMZ) at the border, is where the Koreas have historically held talks.

"We hope that the South and North can sit face to face and discuss the participation of the North Korean delegation at the Pyeongchang Games as well as other issues of mutual interest for the improvement of inter-Korean ties," said Mr Cho.

It is not yet known who will be attending the proposed talks on the 9 January, and North Korea has yet to respond.

They ended without any agreement and the meeting's agenda was not made public.

North Korea has in the past two years quickly advanced its nuclear and convention weapons programme, despite increasing international sanctions.

Mr Moon said he had himself already suggested the Olympic Games could be a "groundbreaking chance" to move towards peace.

He said the relevant ministries should "swiftly come up with follow-up measures to quickly restore South-North Korean dialogue" and ensure a delegation from the North could attend the Games.

But he said co-operation with the South's international allies on halting North Korea's controversial nuclear and ballistic weapon development would continue.

In his speech on Monday, the North Korean leader repeated his threats against the US. He said the entire country was within range of North Korean weapons and the nuclear button was "always on my table".

However, he offered a potential olive branch to South Korea, saying the frozen relationship "should melt".

"We should melt the frozen North-South relations, thus adorning this meaningful year as a year to be specially recorded in the history of the nation," he said.

North Korea's KCNA state media said on Tuesday that the country was "filled with firm determination to achieve fresh victory" in the Games.

Although the North has missed the official deadline to confirm their participation, the skaters could still compete with an invitation by the International Olympic Committee.