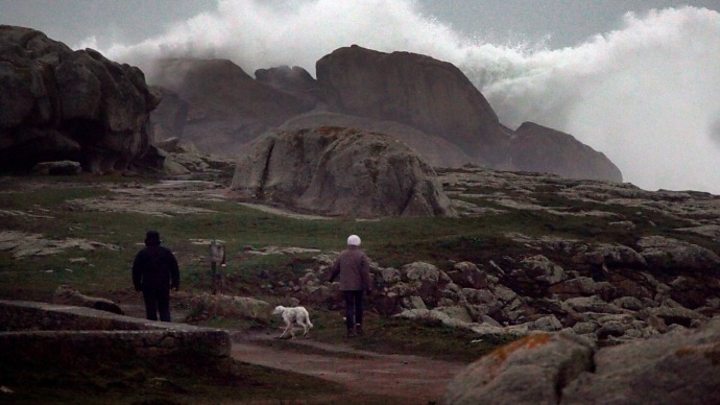 Tens of thousands of people have been affected by power cuts, and air travel has been disrupted.

Two people drowned on Spain's northern Basque coast after being swept away by a huge wave and a skier was killed by a falling tree in the French Alps.

The region is on avalanche alert, with many ski resorts – busy for the school holidays – closed for a second day.

Meanwhile in the French island of Corsica strong winds are fanning two wildfires, described by local officials as "exceptional in the middle of winter", according to AFP.

Winds of up to 147km/h (91mph) were recorded in France. Fifteen people were injured in incidents across the country, four seriously.

In the Netherlands, the authorities shut all five of the country's major sea barriers for the first time on Wednesday.

Gusts of more than 110km/h were recorded at Amsterdam airport where hundreds of flights were cancelled.

In Switzerland, strong winds blew a train carriage off its tracks, injuring eight people. Some 14,000 homes in the country were left without power and record wind gusts of 195km/h were recorded near the city of Lucerne.

The storm has also swept over parts of Germany and Austria, where about 20 skiers had to be rescued from cable car in Kitzbühel after a gust dislodged an empty car from its mooring, local media said.

Belgium was put on "orange" alert, the third of four warning levels, with officials urging people to be cautious when going out because of falling tree branches and other flying objects.

In the UK thousands of homes were without power and travel was disrupted after the storm hit. The Met Office recorded gusts reaching 100 mph (161km/h).

Are you in an area affected by the stormy weather? If it is safe to do so, please share your experiences by emailing [email protected].