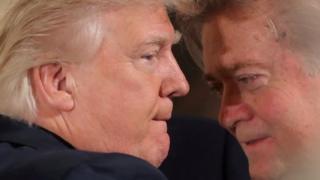 Former White House aide Steve Bannon "lost his mind" after he lost his job, US President Donald Trump has said.

The president disavowed Mr Bannon after he was quoted in a new book describing a meeting between Mr Trump's son and a group of Russians as "treasonous".

The Russians had offered Donald Trump Jr damaging information on Hillary Clinton at the June 2016 meeting.

"Steve Bannon has nothing to do with me or my presidency. When he was fired, he not only lost his job, he lost his mind," Mr Trump said in a statement on Wednesday.

"Steve was a staffer who worked for me after I had already won the nomination by defeating seventeen candidates, often described as the most talented field ever assembled in the Republican party," he continued.

"Now that he is on his own, Steve is learning that winning isn't as easy as I make it look. Steve had very little to do with our historic victory, which was delivered by the forgotten men and women of this country."

Mr Trump's lawyers said Mr Bannon had broken his employment agreement by speaking to the book's author Michael Wolff about Mr Trump and his family, "disclosing confidential information" and "making disparaging statements and in some cases outright defamatory statements to Mr Wolff about Mr Trump, his family members, and the Company," the letter said, according to the Washington Post newspaper.

Mr Bannon, the president's former chief strategist, was considered a key player in the Trump White House and helped shape Mr Trump's "America First" campaign message before he left his post in August.

He returned to his role as the head of the right-wing Breitbart News website, where he said he planned to help Mr Trump's administration as a "wingman outside".

Mr Trump reportedly spoke to Mr Bannon as recently as 13 December, the day of the special US Senate election in Alabama that saw the defeat of Republican Roy Moore, whom Mr Bannon supported.

Speaking to the author, Mr Bannon said of the investigation into whether there was any collusion between Russia and the Trump campaign: "They're going to crack Don Junior like an egg on national TV."

Donald Trump swept to the presidency in part on the back of Steve Bannon and his Breitbart conservative media empire. Now we will see how he fares when he's at war with them.

Emails show Mr Trump Jr agreed to meet Russian associates in June 2016 on the premise that they had damaging information against his father's Democratic rival, Hillary Clinton. The meeting was also attended by Jared Kushner, the president's son-in-law and aide, and then campaign chairman Paul Manafort.

Mr Bannon reportedly told Mr Wolff that the three senior campaign officials "should have called the FBI immediately" after the meeting, according to US media reports.

The Senate, House of Representatives and a special counsel are all investigating alleged Russian interference in the presidential election and alleged attempts to undermine Mrs Clinton – a claim denied by the Kremlin. Mr Trump has also vehemently denied any collusion.

The book makes a series of other claims, including a suggestion that Mr Trump and his election campaign staff did actually not want to win the election.

In March the then-White House press secretary Sean Spicer told journalists UK intelligence services could have been involved in an alleged spying operation on Trump Tower in New York. GCHQ said the allegation was "nonsense".

The Times says Mr Blair was hoping to get a job advising Mr Trump on the Middle East. A spokeswoman for Mr Blair told The Times that the allegations were a "total fabrication" and said Mr Blair had not suggested himself as Mr Trump's Middle East envoy.

Mrs Sanders described the book as "filled with false and misleading accounts from individuals who have no access or influence with the White House".

"Participating in a book that can only be described as a trashy tabloid fiction exposes their sad desperate attempts at relevancy".