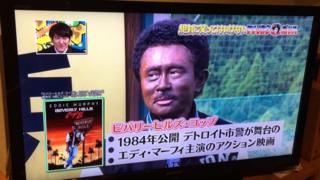 A Japanese TV programme has sparked accusations of racism and cultural insensitivity after a comedian painted his face to impersonate Eddie Murphy.

Using makeup to lampoon black people – a practice known as blackface – is seen by many to be deeply offensive.

Protest over the show have grown over the past days.

US-born writer and columnist Baye McNeil – who is black and has lived in Japan for 13 years – drew attention to the show on Twitter, arguing that black people were "not a punchline nor a prop".

Note to japanese performing in #BlackFace: #Blackness is not a punchline nor a prop. Need jokes? Get better writers. Need a black character, get a black actor that speaks Japanese. There are several! But please #StopBlackfaceJapan #日本でブラックフエイス止めて not a good look! pic.twitter.com/lN0E3bWsgY

He said he loved Japan and wanted to draw people's attention to how the practice of blackface is widely regarded as racist.

He tweeted that his "nightmare scenario" was that during the opening ceremony of the 2020 Tokyo Olympics, "Japan naively sends a Blackface doowop group out to pay homage to black athletes".

"What a fiasco that'll be! So I implore you please #stopblackfaceJapan now."

But there is debate on Twitter over whether Japanese audiences are aware of the racist history of minstrel shows in the US and Europe, and whether it remains racist if performers and audiences are unaware of that history.

You're real proud of yourself, aren't you? You're going to fix a non-problem in Japan by imposing American guilt on them… ?What's inappropriate for the US doesn't apply worldwide #ManufacturedOutrage

Blackface has a history of ridicule and mockery, dehumanizing a particular race; it is part of racism. The comedian did not intend to condone discrimination, but not having racist intentions is an invalid excuse for an action that is considered offensive and morally repugnant.

Other Twitter users defended the show, saying the comedians merely wanted the Eddie Murphy portrayal to be as accurate as possible and pay homage to the actor.

Have you actually paid any attention to how much detail Hama-chan(the comedian) cares about? The clothes, shoes, he really wanted to be Eddy Murphy. We can see his love and respect for Eddy Murphy’s epic comedy. BUT YOU DON’T. You see minstrel show, slaves and hate. pic.twitter.com/FfU89HJEEA

But Mr McNeil said people should learn to be more careful and sensitive with the issue.

Talking to Japanese media, he said the first minstrel shows were brought to the country from the US in the 19th Century.

In 2015, Mr McNeil started a successful campaign to stop the performance of two bands in blackface on national TV.

"I've had numerous conversations with my Japanese friends about the innocuous nature of Blackface in Japan (due to their not having a racialized history or historical ties to Blackface…which is inaccurate)," Mr McNeil writes on Facebook.

"I don't think it's necessarily racist. I don't. At least not intentionally. But it is definitely problematic regardless of whether the people doing it have racist motives or not."

“Blackness is being treated as a tool for comedy, for laughs, and that impacts how I’m perceived and treated on a daily basis here,” explains McNeil. “Do you think these comedians care about that? I doubt it. They should. The quality of my life is affected by them.” …exactly !

In a similar vein, Japanese advertising campaigns have caused controversy in the past for portraying Westerners with Japanese actors wearing blonde wigs and long plastic noses.

Both Japanese airline ANA and electronics giant Toshiba had to pull their TV ads when viewers took offence at the blatantly stereotypical depiction of foreigners.

IcetruckJanuary 4, 2018
Like story:
tweet
Trump fight with former ally Bannon in full focus on late-night TV
After Trump tweet, Pakistan talks of ‘response’ to US action