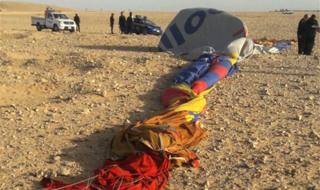 A hot air balloon carrying tourists has crashed near the Egyptian city of Luxor, with one person killed and several injured, officials say.

About 20 people were on board when the accident occurred on Friday. The tourist who died was South African.

The balloon was travelling over the ancient city when it was forced off course and into a mountainous area by strong winds, according to reports.

In 2013, 19 tourists were killed when a hot air balloon caught fire in Luxor.

Luxor governor Mahmoud Badr confirmed Friday's accident, adding that he was checking on the wellbeing of passengers at a local hospital, AFP news agency reports.

A health ministry spokesman said that two of the wounded were in serious condition.

Those on board the flight included a number of foreign nationals from South Africa, Argentina and Spain, along with Egyptian tourists.

No British citizens were involved, the UK Foreign Office said.

The ancient city of Luxor, which lies on the banks of the River Nile in the south of Egypt, has long been a popular tourist destination due to its archaeological sites.

Hot air balloon crashes have occurred in the region before.

In 2016, balloon flights were temporarily halted in the city after more than 20 people were injured in a similar accident.

The deadly incident in 2013 was the result of an explosion mid-flight and involved tourists from the UK, France, Hong Kong and Japan.