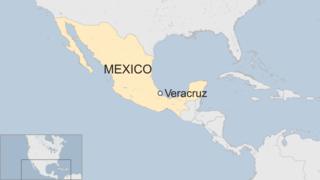 The severed heads of five people have been found on top of the bonnet of a taxi in Veracruz, Mexico, local media reports say.

The vehicle had been abandoned on the side of a road.

The torsos of the victims were found in black plastic bags inside the car and in its boot, sources quoted by the Mexican magazine Proceso said.

The taxi had graffiti on its bonnet, linking it to the Jalisco New Generation drug cartel.

Mexico's most-wanted: A guide to the drug cartels

The state of Veracruz, where the bodies were discovered, suffered 2,200 homicides between December 2016 and December 2017.

According to information released by the Executive Secretariat of Mexico's National Public Security System, 70% of homicides in Veracruz were connected with organised crime.

Recently, the State Prosecutor's Office and the Veracruz Secretariat of Public Safety have claimed they have dismantled several organised crime groups.

On 28 December, the state authorities held a press conference in which they said they had ended the activities of the armed Sombra (Shadow) group, which specialised in kidnappings, as well as several organised crime cells.